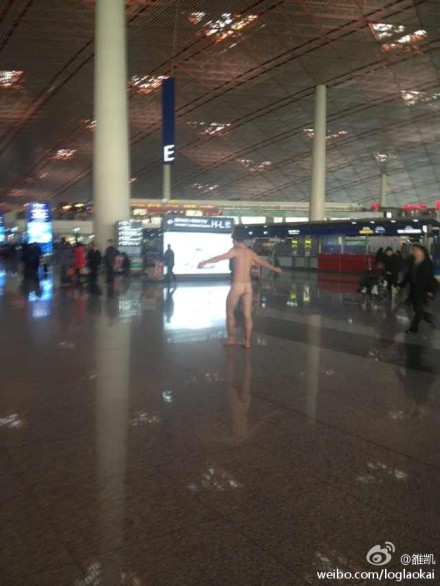 That last detail is provided by Legal Mirror, but the man doesn’t appear to be running or chased in the above picture posted to Sina Weibo. Although if a picture exists, it means there has to be a video, right?

Eventually the man was corralled and covered up with a blanket. Authorities say he was schizophrenic, so they sent him to the hospital. The man might have come unhinged by an argument on the airport shuttle train, when he refused to let a Chinese passenger sit in an open seat next to him.

And with this, we introduce a new tag: streaking.

Also, if you’re type to follow where curiosity may lead, try a Chinese image search for “Beijing Airport Naked” on Baidu. Wacky results.

One Response to “Foreigner Goes Streaking In Beijing Airport”