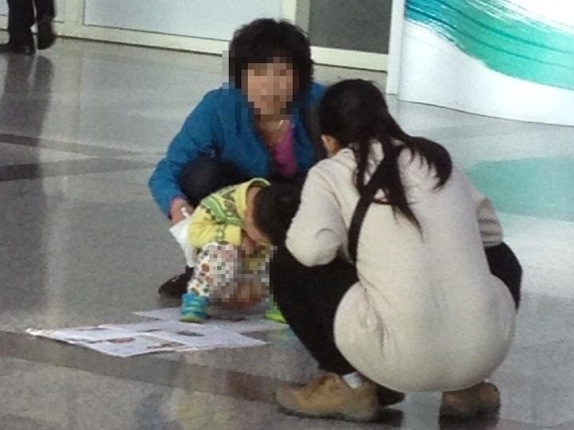 Ah yes, another moment in Chinese poop history. In a Taiwan airport recently, someone snapped a picture of a toddler defecating onto a newspaper in the middle of the ground, reportedly with a bathroom nearby. Culture, right? What can ya do? The photograph found its way to Facebook and then Taiwan’s NOW News, and people are kind of unhappy.

SCMP’s Amy Li has the story:

“There aren’t enough public toilets in China and the ones they do have are usually dirty,” commented a Taiwanese blogger, “This might explain mainlanders’ poor hygiene habits.”

“This is  a typical mainland parent who spoils their children,’’ said a mainland netizen on China’s twitter-like Sina Weibo.

We can only say, by way of counterpoint, that at least the kid’s mother had the courtesy to lay down a paper for easy disposal. And look at how young he is! You can bet this kid won’t be pulling shit like this when he’s ten.