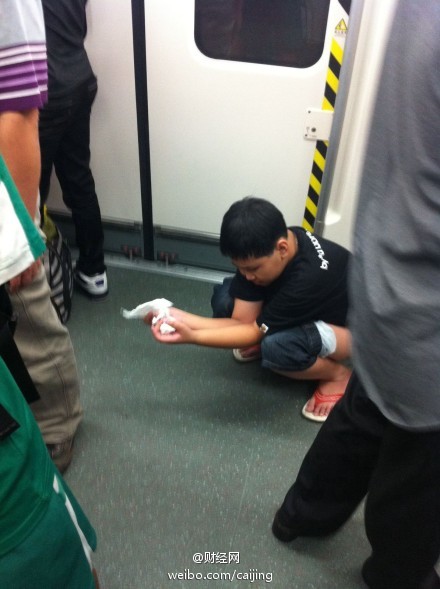 This is one of those stories that Chinese netizens would probably prefer to keep bottled up within the confines of Chinese social media, considering mainlanders already have a reputation for being shameless when it comes to public defecation.

On Saturday, someone posted onto Sina Weibo a picture of a boy pooping on a crowded Guangzhou subway train. “I was shocked today,” the person wrote. “This is what I saw on Subway Line 3. That’s right, the kid in the corner is defecating. And a really big load!!” Apparently this happened during rush hour with the parents were standing nearby.

People have been flinging the mud ever since. As translated by Ministry of Tofu, some select comments on Weibo:

小萱草：I saw this pic on FB (Facebook). The comments are 100% unanimous, saying ‘Not surprising for Chinese’!!!

Wynn：This is truly a matter of education within the family!!!

sanzond：This kid is poorly brought up. At 10, he should have understood things. Why didn’t he clean up the poop he left? Even my 3-and-a-half-year-old daughter knows one should not litter in public places.

猫娘_Fan：An ill-bred son is the fault of the father!

月岛免免: what kind of person is he? Worse than dogs! Even my dog knows how to withhold.

宝宝是只柴犬：With such a parent, the kid is truly worrisome.

We wouldn’t be so quick to castigate the kid, who is reportedly only 10 years old. The incident certainly looks bad, and reflects poorly on those of us who, sitting comfortably right now, believe we could never be rendered so pathetic by untimely bowel movement. But hey, raise your hand if you’ve never, ever pooped in your pants after, say, age eight (when you knew the feeling of shame).

Those with your hands up, stop lying. Unless it’s really true, in which case — listen, hate to break it to you, but karma’s gonna catch up and you shit’s gonna explode, and I sure hope no one nearby has a camera phone when it happens.

Of course, since TV news gets 80 percent of their stories from Weibo these days, the subway defecating boy made TV station news everywhere. Poor kid.

13 Responses to “Moments In Poop History: This Kid On The Guangzhou Subway”