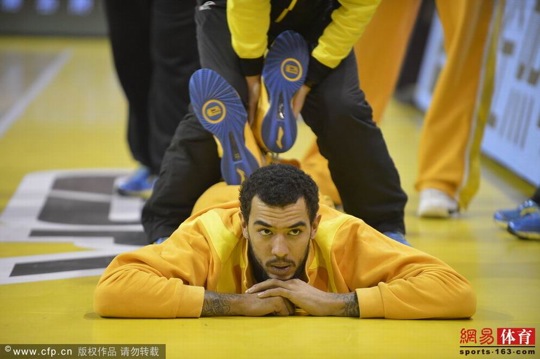 Marcus Williams became the first basketball player in China to be busted for “doping” on December 9 when he tested positive for marijuana, but so far he’s managed to avoid making silly, trite excuses such as “I was using for medicinal purposes.” We commend him for that.

His agent, however, is happy to do so on his behalf.

Shen Zhiyu, as quoted in Xinhua:

“Williams has been bothered by stomach problem for a long time so he brought some marijuana to China as a painkiller,” said Shen.

“He suffered from a stomachache before the match and the medicine from the team doctor did not work,” he said.

“So he had some marijuana and did not tell anyone,” Shen added. Williams was drawn to take the test in the Dec. 9 match when Shanxi clinched a 103-99 away win at Jilin.

Williams says he wants a second chance. “I really cherish the opportunity playing for the team,” he said, as quoted by Xinhua. “I will always ha[ve] them on my mind and keep watching the game.”

Because we’re talking about pot here — which, even in China, is still just pot — no one seems to care. Williams’s club, the Shanxi Brave Dragons, was fined 10,000 yuan, but the team’s deputy general manager, Zhang Beihai, says it would welcome Williams back. “Williams had contributed a lot to Shanxi. Although he can no longer fulfill his task this season, the club will welcome him back next season as long as his return complies with CBA’s regulations,” he said.

Williams’s contract is until 2014, and he said Shanxi would be his first choice if he returns to the CBA.

Meanwhile, if you want to know how Williams’s running mate, Charles Gaines, is doing, consider his stat line in the two games in which he’s been the lone foreigner:

Shanxi lost both games by a combined 45 points. We’re obligated to note that this happened in one of those contests.