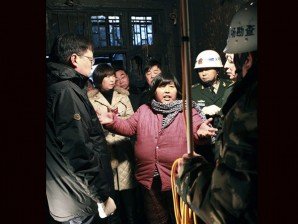 On Friday, a fire at a private orphanage in Lankao county, Henan province killed six children ages seven months to five years and one 20-year-old young adult. The story’s sad enough without any of other details, but then you learn that the shelter was run by Yuan Lihai, a former street vendor who has taken in more than 100 homeless children, many of them sick or disabled. And then you learn that she’s actually a controversial figure, as skeptics accuse her of defrauding insurance companies and selling children. Who do you believe?

To muddle everything, the Lankao county government issued its statement yesterday. As reported by AP:

“There is a direct relationship between today’s situation and the fact that some related government departments failed to enforce supervision and loosened management on purpose,” deputy county governor Wu Changsheng said at a Saturday press conference as quoted by the news report. “They should shoulder responsibility, and that’s a loophole in our work.”

Glass half-full or glass half-empty: which are you?

It’s clear which side the Chinese public has taken:

On China’s social media, the public have shown overwhelming sympathy toward Yuan. A Saturday editorial by the official Xinhua News Agency blamed the local government’s inaction and media — who had previously praised Yuan’s actions — for the tragedy.

“The selective blindness of the local government and media reports prior to the tragedy has turned out to be more dangerous than the fire itself,” the editorial read. “And until those with the power to rectify these issues open their eyes, similar tragedies are bound to happen.”

We don’t know yet whether Yuan will be punished. The cause of the fire is also unknown.

Let’s end on an optimistic note:

Wu told reporters that the county would spare no effort to build a welfare center in 2013 to ensure no abandoned child should be left uncared for.

5 Responses to “Officials In Lankao, Where A Deadly Fire Destroyed A Private Orphanage, Might Be Blaming The Adoptive Mother [UPDATE]”