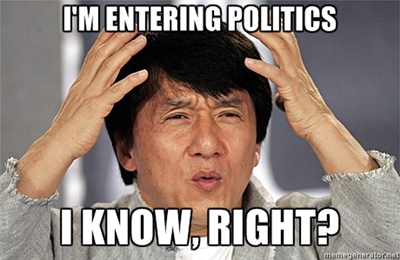 Jackie Chan has been appointed as a Hong Kong delegate to the Chinese People’s Political Consultative Conference (CPPCC), according to SCMP. Chan Wing-kee, a standing committee member, said yesterday that Chan’s name was on a list of proposed members.

No one — absolutely no one — should think Chan will do actual politics, as his closet comp appears to be Joe Biden on acid.

Political observer Dr Chung Kim-wah, of Polytechnic University, described Chan’s appointment – yet to be officially announced – as “another political vase” for decoration’s sake.

“I don’t expect there’s anything revolutionary Chan can or will do for Hong Kong in the CPPCC, which is largely a talk shop,” said Chung.

“But for him, it is very good because he can more strongly secure the China market.”

Still, it should be interesting, if only because this means we’ll see MORE JACKIE CHAN. YES PLEASE. The man is two years away, max, from starring in his own reality TV show, and if he could do it as a member of China’s top political advisory body, who wouldn’t watch?

Meanwhile, Chan’s latest movie, CZ12, is tearing it up at the Chinese box office. The movie has a patriotic theme. Of course it does.

4 Responses to “Jackie Chan And Politics: A Match Made In A Heavenly Type Of Hell”