Bus driver Mao Zhihao was leisurely driving down the road on Sunday, March 24 in Quzhou, Zhejiang province when HOLY CRAP WATCH OUT FOR THAT POLE!

Watch in the above as a streetlight crashes directly through the bus’s windshield. The 44-year-old driver ducked in the nick of time, escaping death. Impressively, he also stopped the bus, ensuring that no passengers got hurt. For his efforts, some have bestowed upon him the “Most Beautiful” label.

We’ve seen debris fly through bus windows before on China’s roads, sometimes with tragic consequences. It’s lucky that no one on Mao’s Bus 602 was seriously injured, despite the aftermath looking like this: 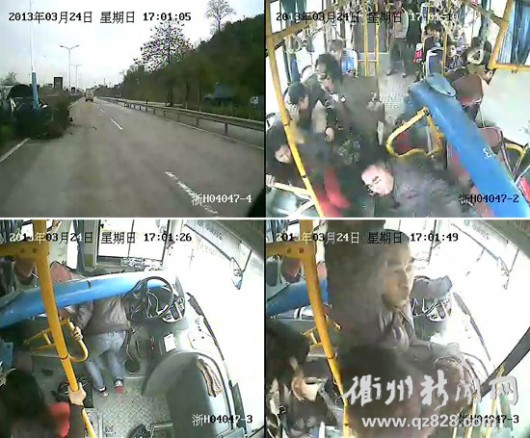 One Response to “Crazy: Bus Driver Barely Dodges Massive Pole That Crashes Through His Windshield”