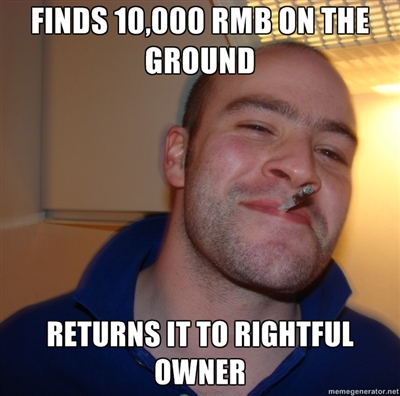 We’ve seen people behaving poorly upon finding wads of cash floating in the wind. This is the obverse of that type of story.

In Shanghai on Saturday morning, a drunken man threw 10,000 yuan ($1,608) into the air at the intersection of Gonghexin and Baode roads, according to Shanghai Daily, reason unknown (repeat: he was drunk).

Upon finding the money returned to him — mostly collected by two local middle-aged women — he was “shocked.”

Witnesses said the money was blown by the wind and falling all around the intersection. But there were not many cars or people there at the time, witnesses said. People started collecting the money and they immediately returned it to the drunken man, police said. Among them, two middle-aged women collected the most money and turned it in to police.

Remember Qin Xiaoliang, the migrant worker who lost more than 14,000 yuan when it fell out of his pocket while he was riding a scooter? (See top link.) Remember when netizens donated more than 22,000 yuan to him, and he donated a lot of that to charity? Yeah, these are the stories we prefer. More, please.