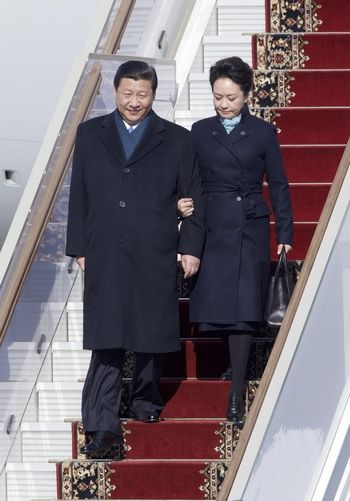 Peng Liyuan, who’s warming up to her role as China’s “First Lady” — a term that, lest you forget, has basically never been applied to the wives of Chinese leaders — is currently traveling with her husband in Africa as part of Xi Jinping’s first overseas trip as Chinese head of state, and it’d be an understatement to say she’s kind of stealing the show. The New York Times called her “glamorous, fashionable and one of her nation’s best-known singers,” while reminding us that she “became a household name in China well before her husband,” thanks to her career as a People’s Liberation Singer beginning at the age of 18. The Brits are taking turns chirping about the “Kate Middleton effect,” with the Telegraph noting, “Footage of Peng Liyuan, 49, simply dressed in a black coat and light blue scarf triggered first lady fever in the Chinese media and on the internet.” The AP and CNN both used the word “glamorous” in their stories. And Chinese Internet — don’t get me started; there’s Sina (above pic), People’s Daily calling her “charming” in its headline, and CNTV covering her trip to a Russian orphanage, et alia.

None of this surprises us, even as, last fall, Sina Weibo was actually blocking searches for Peng Liyuan. As early as last November, we were extolling the virtues of unleashing the megawatt-star-power potential of Peng. Allie Jaynes wrote, “You’d think having a singer babe on your team who devotes her spare time to anti-smoking campaigns and helping earthquake victims would be a windfall for the party’s propagandists.” Oh, and don’t forget working on tuberculosis and HIV/AIDS issues, because she does those, too. Peng is a political boon and a dream for advisers, publicists, and narrative-makers from Zhongnanhai to Capitol Hill. What further proof do you need of her ability to charm and captivate?

Glad you asked. Glance upon the following video, from a PLA performance in Moscow on June 20, 2005. The Chinese newscaster stops talking at the 47-second mark, at which point you can watch Peng electrify the crowd. Oh, she sings in Russian. Few in the audience, one imagines, knew Xi Jinping in 2005, but after this show, most of them probably remembered Peng Liyuan.

More than half a million people have watched this video on Youku since it was posted three days ago. Star power. Only a fool would fail to bottle it for use in the one arena — the biggest of them all, politics — in which China desperately lacks personality.

5 Responses to “Here’s Peng Liyuan Singing In Russian And Dazzling A Moscow Crowd In 2005, Cause That’s What She Do”

Leave a Reply to Julie