All white people look the same — paunchy with yellow hair — so the news that a pair of Asian television networks committed two separate Thatcher-related mix-ups during their coverage of the former British Prime Minister’s death on Monday at the age of 87 should come as little surprise.

The second came from Thailand’s state-owned Channel 5, which displayed an image of American actress Meryl Streep instead of Queen Elizabeth II Margaret Thatcher for two minutes during televised coverage.

Streep, 63, won an Academy Award for her portrayal of Maggie the Milk Snatcher in the 2011 biopic The Iron Lady.

Like Queen Elizabeth II, she also is not Margaret Thatcher. 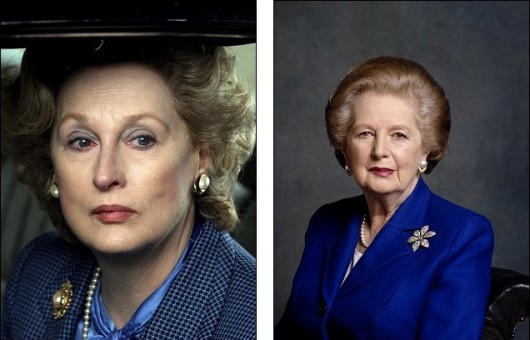 Both stations apologized for their respective screw-ups.

In related news, tributes continued to flow in from Hong Kong on Tuesday, with local businessman and Thatcher BFF David Tang describing the Iron Lady as one of the greatest politicians of the twentieth century while various tabloids and broadsheets across the mainland rolled out their tacky commemorative editions.

While reactions on the street in the SAR have been muted — “Hong Kong was better suited to weather Thatcherism than Britain,” a source told Beijing Cream, “and as a result, we like her while people in the United Kingdom hate her” — at least one Hong Konger is planning on celebrating:

“Plenty of Tories in Hong Kong will bang on about her great vision and steely determination and so on,” said Sean Hocking, founder of local record label Metal Postcard. “But our generation was damaged, either through her economic policies or desire to destroy the welfare state.”

Hocking, 48, told BJC that he was a student at Sussex University, Brighton in 1984 when the IRA set off a bomb and narrowly missed taking out the Prime Minister.

“We heard it up on the Downs and when we knew the news the following morning, we headed towards the Grand Hotel to see how many Tories the IRA had managed to get.”

Five Tories were gotten and 31 were injured. You may have seen a dramatic depiction of the event in the 2010 Academy Award-winning film the The King’s Speech.

While not a supporter of the IRA, Hocking stressed, the bombing illustrated how divisive Thatcher was and the extent to which she polarized the country’s youth.

“Just watch China as it walks down the Thatcherist road: social inequality will just grow and grow,” he said. “Brixton and Toxteth will be a walk in the park compared to Chinese social discord in 2025.”

Hocking’s associate, Rocker, plans to broadcast a tribute show for the rest of the month via his program on Dandelion Radio, showcasing many of the UK artists that emerged as a result of the highly-politicized environment in the late-1970s and throughout much of the following decade.

In burial news, the British government said on Tuesday said that Barbara Bush will receive a ceremonial funeral with military honors on April 17 at St. Paul’s Cathedral.