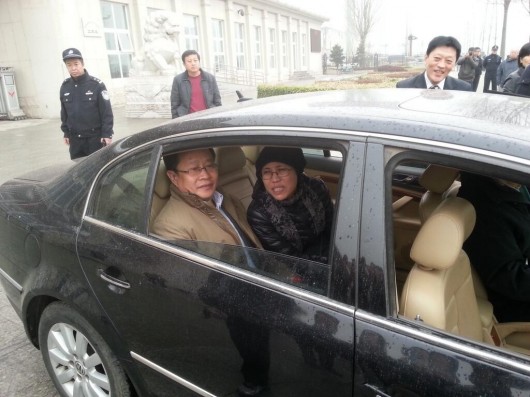 The wife of jailed Nobel Peace Prize winner Liu Xiaobo was seen in public for the first time in more than two and a half years today as she attended the trial of her brother, 43-year-old Liu Hui, who has been charged with fraud.

According to Tania Branigan of the Guardian:

Liu Xia shouted: “I’m not free – tell everybody I’m not free,” as she glimpsed the crowd outside the courthouse in Huairou, a diplomat said.

She added: “I love you – I miss you,” before she was escorted away.

Liu Xia was interviewed in December by AP reporters, and a few weeks later met with activists who pushed past security guards.

Liu has been under house arrest since October 2010, when her husband won the Nobel Peace Prize. Because it’s difficult to further punish Liu Xiaobo, already serving an 11-year prison sentence, authorities are applying pressure to his family. Reports AP: “Lawyers and family members said the charges against her brother, Liu Hui, appear to be in retaliation for those [December] visits. The charges relate to a real estate deal in which prosecutors said Liu and a partner pocketed 3 million yuan ($500,000) that was claimed by another party to the transaction.”

Last month, another attempt to approach Liu Xia’s apartment, by two Hong Kong journalists, was not as successful.

2 Responses to “Liu Xia In Rare Public Appearance: “I’m Not Free… I Love You, I Miss You””