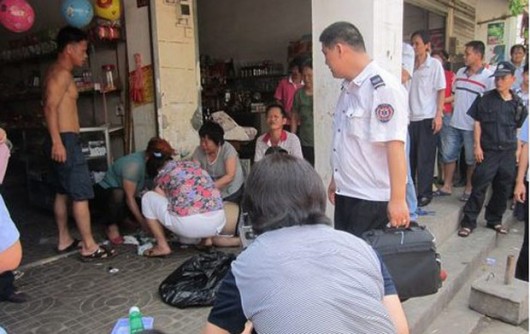 The two parties soon fell into a quarrel, and then a physical confrontation. The furious woman called her husband and brother to come help her, which resulted in a more violent fist fight.

During the fight, the middle aged woman manged to grab the man’s testicles, and squeezed them until he finally collapsed on the ground. The man was immediately rushed to hospital, but unfortunately died there despite of efforts.

Rocket News 24 is now reporting that the woman’s trial began on April 8, and the verdict may come down to one line:

As she held the man in a nut lock, witnesses reported her to have shouted, “I’ll squeeze it to death, you’ll never have children again!”

Apparently she didn’t know how right she was, because soon after the man went into shock from the pain. Paramedics rushed to the scene and treated the victim but he was soon pronounced dead.

With the trial ongoing, the result may hinge on the woman’s alleged statement of “squeeze it to death.” Depending on how it’s interpreted, she may be convicted of murder.

The woman is charged with committing a capital offense that is “especially cruel.” The potential sentence is not less than 10 years, up to life imprisonment or death.