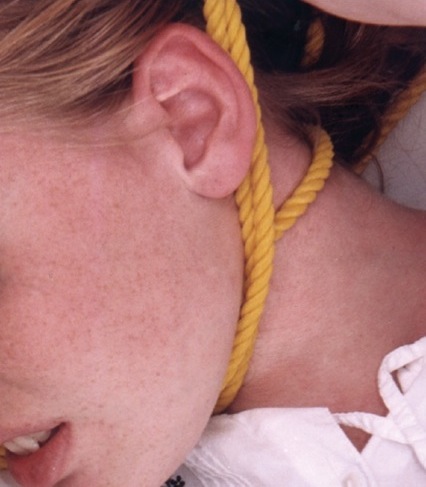 A girl in her early 20s in Jiangxi province was surfing the web on her phone last September when she stumbled upon a website containing this kernel of titillating, dangerous insight: “Rope strangulation can yield pleasure.” As Changjiang Network reports, the girl, called Lin, approached her longtime best friend, one year younger, with the idea. Both very bored, they decided to try it.

They located a strap from a skirt. They lied down in bed, facing each other, and turned off the light. Lin slowly twisted the strap around the neck of her friend, Li. As it wound tighter and tighter, Li showed no change. Lin twisted tigther.

A few minutes later, Li began yelling, waving her hands, and struggling. “Save me!” she gasped.

Shocked, Lin released the strap, but didn’t help her friend take it off. “I thought she had found her pleasure,” Lin said was her first reaction.

After Li passed out, Lin began to panic. Her childhood friend died before her eyes.

Fearing she’d be held responsible, Lin picked up a knife and slit her wrists — but not deep enough, apparently. She woke the next morning, after the blood clotted, and came to fully comprehend all that had happened. She dialed for help.

Ningbo’s Intermediate People’s Court convicted Lin of manslaughter yesterday, but handed down a reduced sentence. Owing to the fact that she turned herself in and her family promptly compensated Li’s family and even extracted from them a bit of understanding, Lin will only be spending the next seven years in jail.

A journalist interviewed a doctor about whether strangulation can cause pleasure. “Complete nonsense,” the doctor said.

Up to 1,000 people reportedly die of autoerotic asphyxiation every year in the US.