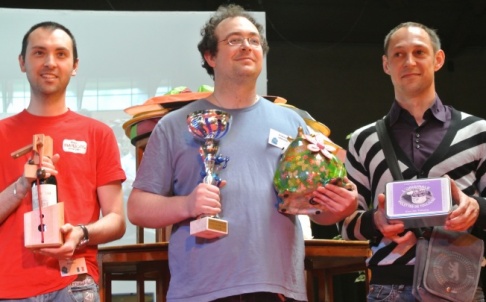 The French won gold, silver, and bronze at the European Mahjong Association’s French MCR Championship in Toulouse, France on May 18-19. Italians finished fourth and fifth. A Dutch player finished sixth.

The Chinese, who invented mahjong, only had two players place in the top 13 — Yang Zhang and Cao Lihua finished 7th and 8th, respectively.

“Some of them have practiced at mahjong competitions for a longer time even than the Chinese citizens have played mahjong for fun,” Yao Xiaolei, assistant to the secretary general of the World Mahjong Organization, told Global Times. “Some of them” being Europeans, of course.

He added that some top Chinese mahjong players could not make it to France this time and the jet lag also created distractions.

Or could it be that the Chinese are simply too proud to play mahjong professionally?

Zhao Jisheng, an associate professor at the College of Sports at Beijing Normal University, gave another explanation for the failure. “Anyone trying to excel at mahjong will be regarded as an idler in China, which makes it difficult to organize a professional mahjong team,” said Zhao.

We’ll conveniently ignore, for a second, the massive mahjong tournaments — some lasting up to three months — hosted in China. Seriously, what gives? Look at that above picture and tell me it’s not the shame of this nation! There were 13 Chinese players in the 108-person field, and all of them can expect their citizenship to be revoked.

The “national humiliation” has been a popular topic on Sina Weibo, reports SCMP.

“We cannot let foreign devils beat us,” one person commented.

“As a person from Chongqing, I feel the nation needs me now,” said a resident of the city known to produce talented mahjong players.

Some cited the national athem. “As the Chinese people have arrived at their most perilous time,” they wrote. “Every person is forced to expel his very last cry.”

Sigh. At least this country still has ping-pong. And thank God for badminton, where Team China just swept Korea to retain the Sudirman Cup. Thank God for that.