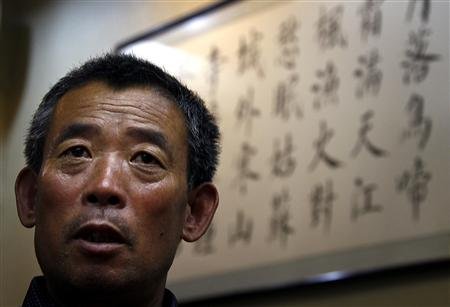 Authorities still don’t get it. It’s over. Chen Guangcheng is gone. He’s in the hands of overseas activists now, and hasn’t said a thing that was new or interesting since winning the Lantos Human Rights Prize in late January.

In other words, stop doing THIS SHIT:

Security personnel in eastern China are carrying out a nightly harassment campaign against the brother of blind rights activist Chen Guangcheng, the two said on Tuesday, throwing rocks, bottles and dead poultry at his house for 12 nights in a row

Dead poultry? Twelve nights in a row? Come fucking on.

We pause here to note that Reuters’s story is one-sided, quoting Chen Guangcheng relaying the words of his brother, Chen Guangfu. “Chen Guangfu, 56, said the attacks started on April 18,” Reuters reports, “the same day his brother had been put on a village Communist Party blacklist for his plans to visit Taiwan and, the party said, Tibet.”

Of course police didn’t answer calls, but even if they did, who would you believe? After authorities did this to Chen Guangcheng’s nephew, Kegui? And this to the spouse of another activist — a person, Liu Xia, who has never been committed for a crime?

The Telegraph also got in touch with Chen Guangfu, who says posters labeling the family as “traitors” have proliferated in their village, Dongshigu in Shandong province.

But most of Mr Chen’s family remained in their village and, as this anniversary of his departure approaches, relatives claim they have become the target of a growing campaign of intimidation and harassment Chen Guangfu, the lawyer’s 56-year-old brother, said he believed the campaign was a form of retaliation for the activist’s continued outspokenness as well as plans to visit Taiwan in June.

He claimed the campaign of intimidation was intended “to pressure Guangcheng”, who reportedly remains heavily involved in human rights campaigning in China despite now living in the US.

Sigh. You break bread with hoodlums, and you’ll look like one yourself. China: call off these slavering mutts.

One Response to “Chen Guangcheng’s Brother Says His House Is Being Besieged By Rocks, Bottles, And Dead Poultry”