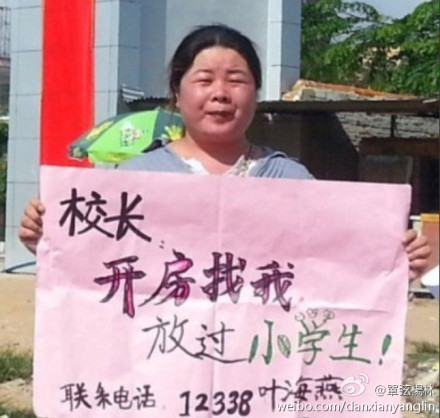 A spate of stories about schoolmasters sexually abusing their pupils in China has caused public outrage, and at least one activist has done something to capture the mood. She nailed it on the head, judging by the authorities’ reaction to her — namely, beating her up.

Ye Haiyan, on May 27 outside Wanning primary school in Hainan province, held a sign that read, “Principals, spare the school kids, get a hotel room with me instead!” That’s her above. The silent protest — small, some might say — touched raw nerves, because Ye soon found herself surrounded by goons. As reported by SCMP:

Gender rights activist Ye Haiyan was assaulted and detained by Guangxi public security officials yesterday after returning from Hainan province, where she had protested against the sexual abuse of schoolgirls.

Ye appealed for help three times on her microblog around noon yesterday, saying her apartment had been raided by about 10 women and one man while she was alone with her daughter.

“There are now four to five women beating me up,” Ye said in her first post. “Please help me to call the police. There is only me and my daughter [here].”

Soon, people across the country were posting pictures of themselves holding posters and signs with Ye’s slogan: “Principals, spare the school kids, get a hotel room with me instead!” 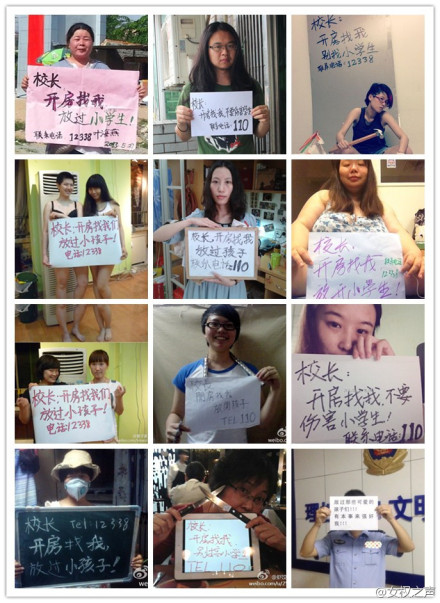 In the case of Ai Weiwei, the slogan was written across his belly: 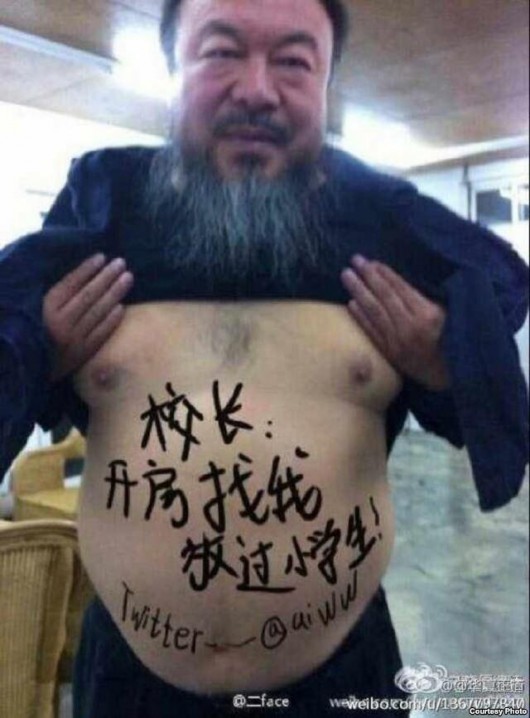 Children’s Day, by the way, was Saturday. With that in mind, Global Voices offer this sobering and disturbing news:

In less than one month, the local media have exposed more than eight cases of sexual abuse [zh] of school children. As far as the media reported, the molesters are school principals, teachers, and security staffs.

The reported cases are just the tip of an iceberg, according to research from All-China Women’s Federation (ACWF). In the past three years, there were more than 2,506 cases of sexual abuse of girls within Guangdong province [zh] alone. Half of the victims are children under 14 and 65 percent of the molesters are acquaintance of their victim’s family.

The person who is actually thinking about the children, and fighting for them, is being hushed up by adults via physical intimidation. Yes, something is wrong here.

These China blogs are also on this story: Ministry of Tofu, Offbeat China, chinaSMACK

One Response to “Ye Haiyan Has Sparked China’s Latest Meme: “Principals, Spare The School Kids, Get A Hotel Room With Me Instead!””