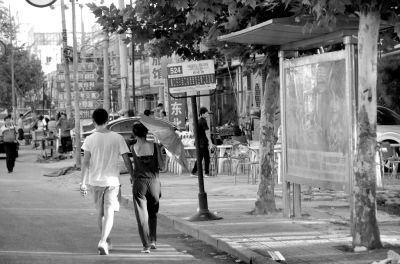 Last night around 8:50 pm at Wudian Road in Beijing’s Daxing district, a man assaulted a woman after a parking dispute, puller her two-year-old baby out of her stroller, and threw her onto the ground, killing her, reports Beijing Times.

It was reported that the woman pushing her sleeping baby stopped at a bus stop to check on her child when a car trying to pull over near where the woman stopped.

The surveillance footage nearby showed that the man sitting on the passenger seat got out and beat the woman after a heated quarrel. Then, the man lifted the baby girl in the stroller and smashed her to the ground.

All of this was captured on camera, footage of which we’re not looking forward to seeing.

The mother reportedly rushed her child to the nearest hospital. The baby was pronounced dead en route to a second facility.

The man was soon arrested and identified as a 42-year-old surnamed Han, recently released from jail for theft. The investigation is ongoing.

(Image via Beijing Times of the scene of the incident)

Recently, while being interrogated by the prosecution, Han Lei expressed that ever since the incident, “it has been particularly painful these past 20-some days, I really don’t want to live anymore.”

…According to Li Ming, “as soon as I saw there was a stroller in the parking spot, I thought to myself that I mustn’t hit it,” but just as he was thinking about how to park his car, Han Lei was already arguing with the woman next to the stroller about parking. At first, he “didn’t see any sign of anger or anything,” but a moment later, “when I looked again, they had already came to blows.”

In was during these few short minutes that the baby girl in the stroller was lifted high above Han Lei’s head and was slammed onto the ground.

UPDATE, 9/17, 9:30 pm: He’s apparently not begging for the death penalty anymore, since his defense is essentially, “I thought the baby was a shopping cart.

Leave a Reply to Yikes