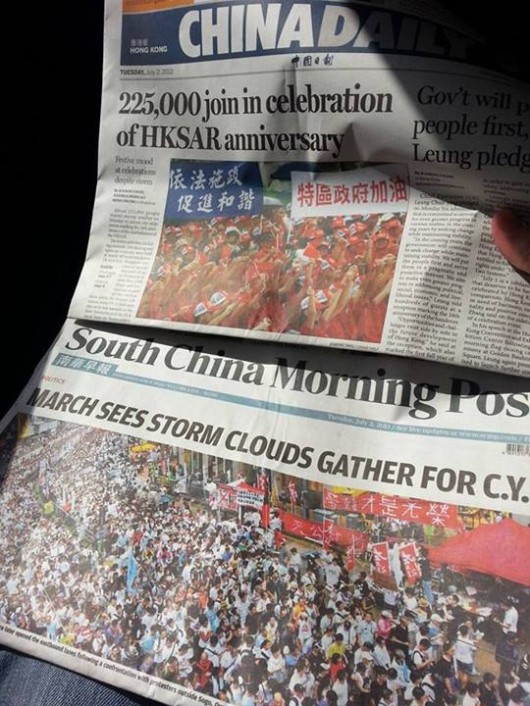 Sometimes newspapers bend the truth, or cast a story in its own editorial light. For examples of this, follow James Fallows’s sporadically updated series about why he reads more than one newspaper.

But then there’s the above. Tens of thousands marched in protest yesterday of Hong Kong chief executive CY Leung and Beijing political influences, but if the only newspaper you read was the China Daily (a hypothetical that applies to no one), you’d be forgiven for thinking all those bodies around Victoria Park were celebrating the 16th anniversary of Hong Kong’s handover. The story:

About 225,000 people braved stormy weather on Monday to attend city-wide events marking the 16th anniversary of the establishment of the HKSAR.

The festive activities, including carnivals, folk dancing and open-air concerts, were held at nearly 40 locations across 18 districts.

By the way, Hong Kong is never able to accurately estimate crowd size even when everyone is in the same area. When activities are spread across 18 districts? Let’s just say there are 18 reasons to doubt the 225,000 figure.

That number appears to come from Cheng Yiu-tong, chairman of the Hong Kong Celebrations Association. Police estimated that 1,500 people showed up to Tamar Park, so if the other 17 districts averaged at least 13,147 demonstrators, then yes, 225,000 people.

The above information comes via, of course, South China Morning Post.