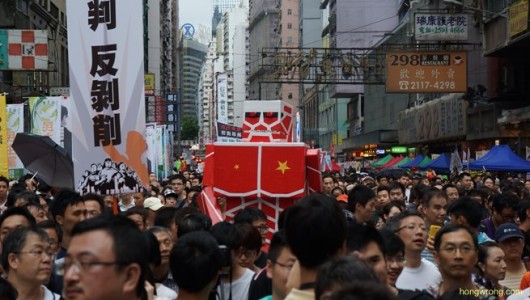 The annual pro-democracy, complain-about-everything rally in Hong Kong drew tens of thousands of people starting at 2:30 pm yesterday in Victoria Park. This happened despite threats of a tropical storm and heavy rain throughout the day. Hong Wrong has basically all the pictures you’ll need, including the above, so let’s start there.

Of course, what would a Hong Kong rally be without some hatred for its executive leader, CY Leung: 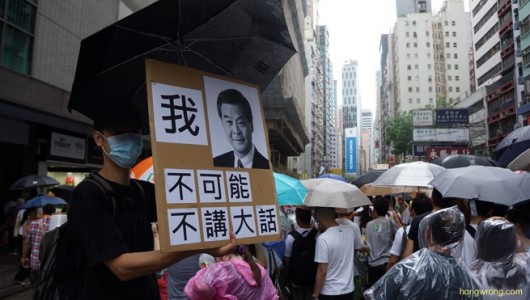 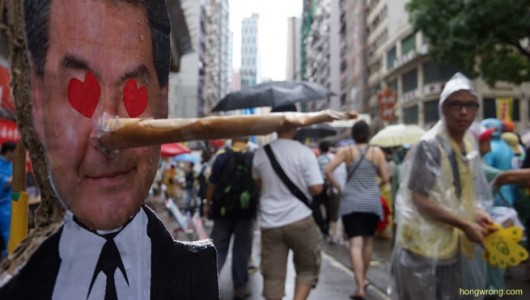 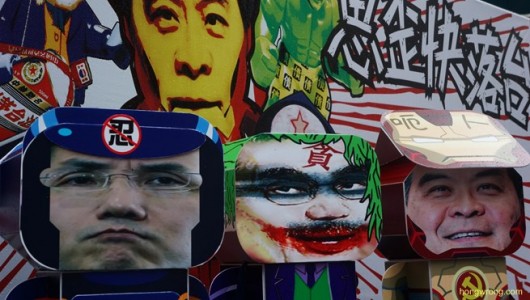 Meanwhile, marchers let their opinions be known, according to LA Times:

Carrying banners saying “defend freedom” and “Chinese colonialists get out,” tens of thousands of marchers took to the rainy streets of Hong Kong on Monday to demand full direct elections and removal of the city’s chief executive.

“We want one person, one vote,” activist Joshua Wong told the crowd that massed at Victoria Park and then marched toward the city’s central business district. “That’s why we are here.”

Leung, of course, has said universal suffrage will come by 2017, but no one trusts him to get the job done.

Speaking at a ceremony on Monday, he described “implementation of universal suffrage for the chief executive election in 2017″ as a “major task” for the Hong Kong government.

“We hope that people holding different views can set aside their differences and seek consensus as far as possible in an accommodating, pragmatic and peaceful manner,” he added.

Meanwhile, lots of terms about these protests was censored on Sina Weibo. Of course they were. It’s sort of, more or less, the reason the protesters are there in the first place.