The anchor said the names were confirmed by the National Transportation Safety Board, which… yeah, Ho Lee Fuk, indeed.

NTSB, you guys okay over there?

It released this statement that blamed the names on an intern.

Earlier today, in response to an inquiry from a media outlet, a summer intern acted outside the scope of his authority when he erroneously confirmed the names of the flight crew on the aircraft.

The NTSB does not release or confirm the names of crewmembers or people involved in transportation accidents to the media. We work hard to ensure that only appropriate factual information regarding an investigation is released and deeply regret today’s incident. 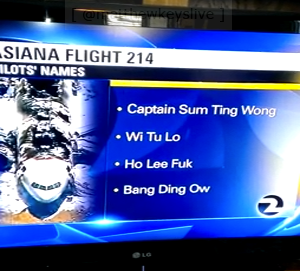 Anyway, there’s been a bit of confusion recently about our Asiana posts, with some thinking I had “demanded” an apology from the Chicago Sun-Times for its “Fright 214” headline, and again after a Korean news presenter expressed relief that the two who died on the flight were not Korean.

Far from demanding anything from the Sun-Times or Channel A, I was merely predicting apologies would come. And I was right, but of course you knew that already, since the Sun-Times operates in a country where political correctness is valued, for better or for worse, and Channel A’s presenter let slip a pretty stupid utterance.

We’ll go ahead and make it three for three in apology predictions here. KTVU will be expressing its regret, and maybe throwing the NTSB under a huge-ass truck.

UPDATE, 3:54 pm: KTVU and its station have already apologized, which makes sense. They’re calling it a “hoax.” From Politico’s writeup:

KTVU apologized during its 6 p.m. newscast.

“First of all, we never read the names out loud, phonetically sounding them out,” anchor Frank Somerville said, adding that the station also didn’t ask the position of the person within the NTSB giving them the ultimately erroneous information.

The station also issued an apology on its website Friday evening.

“We sincerely regret the error and took immediate action to apologize, both in the newscast where the mistake occurred, as well as on our website and social media sites,” Tom Raponi, the station’s vice president and general manager, said in a statement. A full explanation of how the station acquired the names is not yet available, although the station is now calling it a hoax.