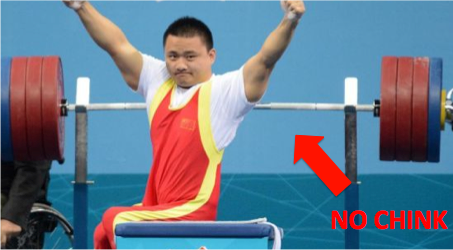 One of my pet peeves is people, Asian or otherwise, pretending to be offended when someone intentionally or unintentionally uses the word chink in a totally non-racial context. (People who are actually offended are only slightly better.) Example: Jeremy Lin, ESPN headline: “Chink in the armor.” We get it: Lin’s Asian, chink isn’t the best choice of term there. But you know what? Chink is also a cool word. It means a narrow opening or crack. Even better, it refers to a narrow beam of light admitted by an opening. It sounds like the thing it’s meant to describe, for I always think of the sound a sword makes on plate armor, and the ensuing gash — the word literally means a high-pitched ringing sound. It’s everything you would want a word to be, combining multiple senses, and it’s certainly better than dent or jangle or tinkle (unless, of course, you mean peeing, in which case nothing beats “tinkle”).

It’s unfortunate that true racists have sensitized America to the point where a word like “chink” and a phrase like “chink in the armor” can never be utilized in the vicinity of Asians. But we can fight back, you know. We can take this word back from the racists, and we do that by stop being such whelps — or the Asian American Journalists Association — whenever we hear the term. Besides, there are so many more insulting things one can say… unless one is an idiot, in which case, I don’t know why you’d take that person seriously to begin with.

All this is a longwinded way of saying look at what Xinhua has written:

With no chink in one’s armour, Liu made it!

That, my friends, is what an offensive sentence looks like. Not racist, just terrible. TURRIBLE! And if you’re wondering about the context:

13 Responses to “Can We Stop Freaking Out Over The Word Chink Now?”