Ji Zhongxin, a 34-year-old petitioner born in Heze, Shandong province, blew himself up on Saturday in Terminal 3 of Beijing Capital International Airport. Watch how he did it, above, in a video that’s been viewed 2.6 million times on Tencent.

Ji was reportedly in Beijing to petition decade-long grievances from his time working in Guangdong province, suffering the abuse of authorities and chengguan. Shanghaiist managed to grab Ji’s Sina blog before it was deleted on Sunday (preserved on James Griffiths’s Pastebin), in which Ji wrote:

Because we are farmers, and are poor, no matter who we turn to, nobody wants to help us. And what’s more, when the chengguan found us, they turned around and called us tramps and beat us. If it weren’t for them taking us to hospital on time, I wouldn’t have survived…

We looked to the sky, and the sky looked away; we called to the earth, and the earth did not respond. We have been forsaken but have nobody to turn to, so all I could do was to hold back tears and go back to Shandong. And now I am festering away, paralysed and over 100,000 yuan in debt. Our family have suffered an unimaginable fate. My uncle died when he was young, and soon after so did my mother and grandmother. The only thing that’s keeping me going is the thought of seeking justice.

Justice in the form of a homemade bomb, apparently, detonated in the international arrivals hall of a major airport.

Ji, who is recovering in a hospital as we speak, may find solace in at least this bit of news: officials have reopened Ji’s case in Dongguan, Guangdong province, reports SCMP:

The Public Security Bureau in Guangdong asked the Dongguan branch to carry out a thorough investigation into mistreatment claimed by Ji Zhongxing, the bomber, and his ensuing petitions, the national broadcaster CCTV reported yesterday, adding that the probe was already under way. 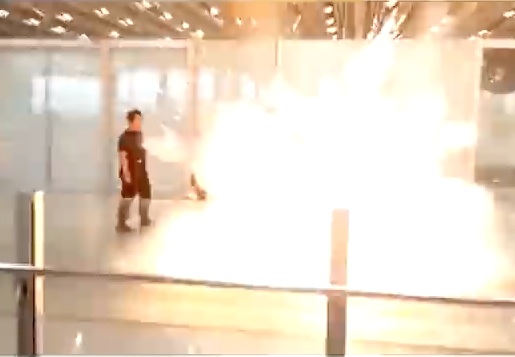