According to the mother interviewed in this news report (note: video contains disturbing content), her son, Binbin, went outside sometime between 5 and 6 pm. An hour or two later, she called him inside — but he was nowhere to be found.

Around 11 pm, he was finally located. His face and body were covered in blood.

On the ride to the hospital, the boy managed to tell his father a bit of what happened. As the father tells the news crew, a man apparently snatched Binbin and tried to take his eyes. The kidnapper apparently told the boy, “Don’t cry. Don’t cry and I won’t gouge out your eyes.”

“No one understands why this happened,” says one of Binbin’s relatives, interviewed in the waiting room. “Look, who did we wrong? No one. Made enemies with anyone? Also no. We’re just a common family.”

“It’s too cruel,” others said. 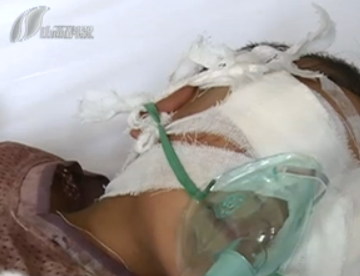 UPDATE, 8/28, 11 am: It’s a female suspect, according to Global Times. Police have offered a 10,000 RMB reward for information leading to her capture. Also:

The boy was unconscious when he was found in a field not far from his home late on Saturday night. The police found his eyeballs at the scene, however, the corneas were gone.

UPDATE, 9/4: Police identify suspect as boy’s aunt, who then killed herself.