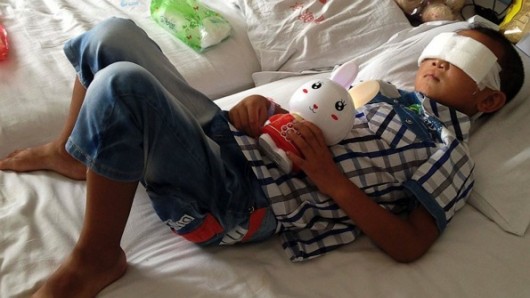 We apparently have closure in the disturbing case of the six-year-old boy who was blinded after a vicious attack in Linfen, Shanxi. By closure, we mean that police are going to stop investigating. But what actually happened on that fateful evening, when both of Guo Bin’s eyes were gouged out, remains very much unknown.

China Daily reports that police have identified the suspect as Zhang Huiyin, who happens to be Guo’s aunt, after the boy’s blood was found on her clothes.

Zhang committed suicide by jumping into a well on August 30, before police could question her. She was not declared a suspect until after her death; indeed, there was no reason to suspect her, since the victim had seen his attacker (her hair was dyed blond) and heard her speak (with an outsider’s accent).

According to the AP, Wang denied reports of any dispute between the families and called them “just a lie.” Binbin’s father says he cannot believe that any domestic dispute could have triggered Binbin’s aunt to hurt him in such a horrible way. “Maybe she went nuts and flew out of control,” he suggested to Chengdu Business News, clearly at his wits’ end.

Aunt Zhang’s colleagues think she’s incapable of such a crime. “She’s decent person, hard working, never had a squabble with anyone,” one told Legal Evening. Colleagues added that Zhang has been “fragile” since being bitten by a snake and hated the sight of blood: even the scene of slaughtering a duck (a common-enough event in rural China) could make her faint, friends said.

Police had offered a 100,000 yuan reward for information leading to a suspect’s capture.

On a slightly better note, it appears Guo Bin will be fitted with a pair of artificial eyes, though he will be blind for the rest of his life. The family has also received approximately 800,000 yuan in donations since the attack made headlines last week, according to China Daily.