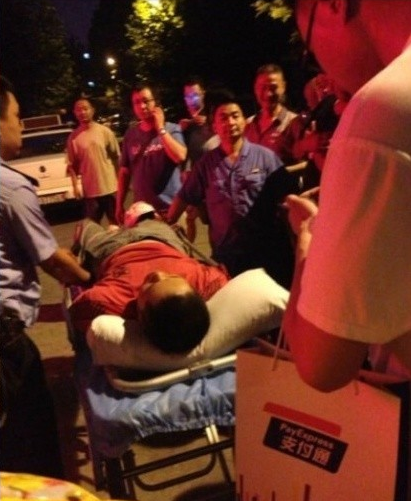 Chengu police confirmed that Li was originally from Jintang county, and said he may have committed the attacks because of financial problems that resulted from “family discord” and the long-term stress of working away from his hometown.

Li’s attacks are a blow to Caojia Alley, a formerly more industrial area that is now a key region in Chengdu’s commercial redevelopment and restructuring program.

This incident follows a similar bus stabbing in Anyang, Henan province on August 20, when a man randomly stabbed 15 people and killed three of them.

Here are some graphic photos of the aftermath via Sina Weibo. Second warning: graphic.

The driver stopped the bus and opened both doors to allow passengers on board to flee. As the suspect fled, he also stabbed passersby.

Holding a mop, the bus driver chased the man, and some people in the street tried to stop him.

Assuming China Daily means “tried to stop the knife-wielder.” Chased him with a mop.