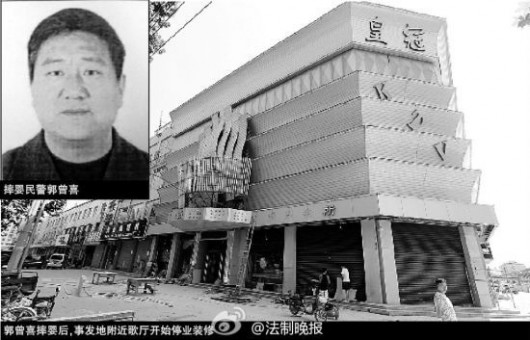 Last month in Linzhou, Henan province, an off-duty police officer reportedly snatched a baby from the arms of a man, raised her above his head, and threw her to the ground — all because he had made a bet with his drunken friends that the child was a doll.

It was not a doll. She was Yueyue, who suffered three head fractures and will probably live with the effects of this assault for the rest of her life.

Horrifying as that sounds, try this: the officer, Guo Zengxi, around 50 years old, reportedly only got 15 days of detention before being released.

The incident happened near a karaoke parlor on the evening of July 20. The baby’s father, Li Qingfeng, said that about a hundred people surrounded Guo after he threw Yueyue to the ground. Li, who was with his wife, quickly rushed his daughter to the nearest hospital.

The incident was brought to light during an NPC meeting when Linzhou Standing Committee head Di Jianzhou called the incident, “Outrageous, outrageous.”

Police say they have surveillance footage of the incident, which “clearly” shows Guo slamming the toddler. They have also issued a statement that Guo will be punished accordingly, because first-degree assault on defenseless toddlers is some crazy goddamn shit.

Also last month, a two-year-old was killed in Beijing after a parking dispute when a man threw her to the curb.

UPDATE, 8/20, 1 pm: Guo has been detained, again, on Saturday “on suspicion of intentional injury,” according to Xinhua. Also, three officials were suspended for incompetence:

Three senior officials were suspended from their posts at Linzhou Public Security Bureau in central China’s Henan Province on Monday after a policeman allegedly attacked a baby girl after drinking alcohol.

The bureau chief, political commissar and deputy secretary of the bureau’s committee of Communist Party of China have been suspended, said an official with the Public Security Bureau of Anyang City, which governs Linzhou.