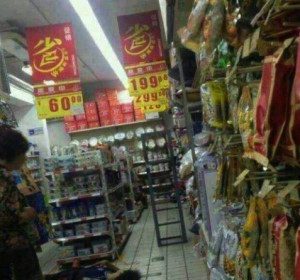 Yesterday evening at 8:30, BJC contributor Alicia was passing the Jingkelong Supermarket at Xindong Lu near Sanlitun when she saw a crowd of people gathered outside. Curious, she paused and looked in. Nothing seemed too out of the ordinary. A minute later, cops attired in black, with black boots — that’s how you know they’re serious — walked up and asked people to disperse. Some lingered of course, but no one quite knew what was happening.

Apparently there had been a fatal stabbing inside that store just 90 minutes prior.

Reports are that a Jingkelong store manager was killed by an employee at 7 pm over a pay dispute, according to People’s Daily.

Valentina Luo of That’s Beijing provides a good summary of the situation:

The victim reportedly managed the security team at the Sanlitun Jingkelong, according to the Beijing Times.

The news outlet also reported that it had learned that the unnamed suspect was a disgruntled former employee who had been in previous disputes with his supervisor, the victim, for deducting his wages.

Witnesses report a frenzied attack. Netizens on Weibo, China’s Twitter-like messaging service, say the suspect “kept stabbing the man’s body even after he had killed him already.”

Luo went back to the scene this morning to find that all had been cleaned up, with no one wanting to talk.

Yet this morning, all seemed jolly with staff doing a brisk trade. There was no mention of the shocking event, and the usually gossipy sales assistants claimed to know nothing of the case.

“I didn’t hear about it,” said one. “Sorry, I was on morning shift yesterday,” said another, a claim made by several.

(It sounded almost as if they had been handed a sheet with three stock denial answers from which they chose to reply randomly. No one looked surprised, no one looked even curious about what I was talking about: an explosive account of tragic violence that had occurred right at their workplace.)

All has returned to normal. Until the next attack, of course.

Frenzied Knife Attack in Sanlitun Leaves One Dead, No One Cares (That’s Beijing)