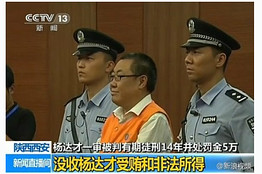 Yang Dacai, dubbed the “smiling official” after he was pictured grinning ear-to-ear at the scene of a horrific traffic accident last August, has been sentenced to 14 years in jail for accepting bribes. He smiled. As Wall Street Journal notes, he looked “oddly beatific.”

Maybe the guy is naturally disposed to smile? He’s like a cat. Could it be that we were all wrong to cast aspersions at him following this picture? 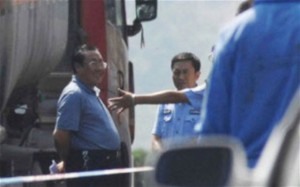 Prosecutors said Mr. Yang, also referred to online as “Brother Watch,” failed to explain the origin of more than 5 million yuan ($802,000) in family assets, according to the China News Service (in Chinese). An investigation found he had accepted bribes totaling 250,000 yuan from an unnamed company that needed help passing a safety inspection.

After confessing to having fallen into the “abyss of criminality,” according to the report, Mr. Yang said it was “too late for regrets,” adding: “In admitting my guilt and showing repentance, my fervent wish is that the court will give me the opportunity to once again be an upright person.”

In addition to the prison time, Mr. Yang will be fined 50,000 yuan and forfeit all of his family’s ill-gotten assets, state media said.

Yang is called “Brother Watch” because microbloggers posted five photos of him wearing luxury watches. It kick-started a corruption investigation that eventually brought him down.

10 Responses to ““Brother Watch,” Felled By A Smile, Smiles Through Sentencing Of 14 Years In Prison”