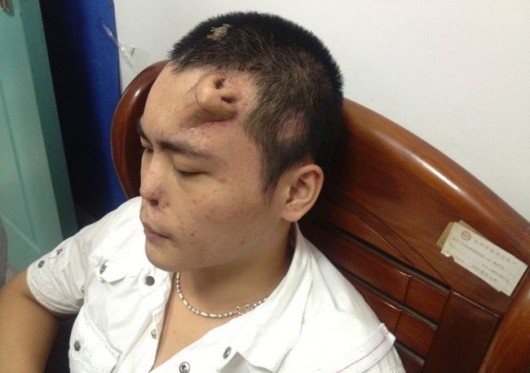 We don’t mean to gawk, but… okay, maybe just for a minute more.

Here’s a man in Fuzhou, Fujian province with a nose growing out of his forehead, because surgeons put it there in anticipation of a transplant. Reports Reuters:

Surgeons in China are growing a new nose on a man’s forehead to replace his original nose after an infection corroded the cartilage, making it impossible for surgeons to fix it.

Xiaolian, 22, got the infection after neglecting his nasal trauma following a traffic accident in August, 2012.

The new sniffer involved “placing a skin tissue expander onto Xiaolian’s forehead, cutting it into the shape of a nose and planting a cartilage taken from his ribs.”

The transplant surgery may happen soon.

Here’s a video of Xiaolian’s doctor explaining the procedure to assembled media:

2 Responses to “Man Grows Nose On Forehead, Just As His Surgeon Planned”