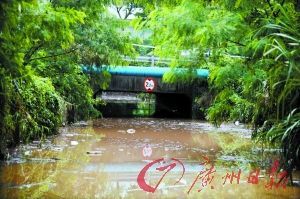 Imagine being trapped in a car stuck in a culvert amid heavy rain. The water level slowly rises, starting from the knees. You call the police. One hour passes. It’s at your neck. Two hours. Your mouth. And still, no signs of rescuers…

Rains battered Shenzhen on Friday, as “47 firetrucks were put to use in 38 separate incidents as rain reached 113.8 mm,” reports The Nanfang. There were two deaths. One man was electrocuted. The other, a woman, drowned in her car, and it’s her story that’s frightfully harrowing.

At 4:40 a.m. on Friday, Tong’s husband was woken by a phone call while he was on a train back to the couple’s native Jiujiang in Jiangxi Province with their 9 year-old son. Tong told her husband, Huang Sentian, that she had already called the police because her car was trapped in a culvert and she was already up to her knees in water.

At 4:54 a.m. Huang called his wife back and she said: “The water is now almost up to my neck and I still can’t open the door. But don’t worry, I’ll come up with a solution.”

At 5:11 a.m. a school classmate of Tong called her and was told that the water had now reached her neck and that she was still waiting for emergency services.

At 5:13 a.m. Tong called her classmate back and exclaimed “How have you people not found me yet?” After realizing it wasn’t the rescuers she said “Sorry, wrong number.”

Rescuers finally found her car at 7:30 am, and removed her body 30 minutes later.

The woman’s husband is rightfully furious with the police. According to SCMP:

“The city’s poor drainage caused my wife’s death. How bad is our municipal infrastructure that a car can be submerged in just a few minutes?” Huang said.

“But it’s totally unforgivable that the policemen did little to try to save my wife. They told me they arrived there at 4.59am. But my wife was still fully conscious at the time and even made calls at 5.11am and 5.13am.”

“How could they not reach my wife? There are no acceptable excuses here,” Huang said. 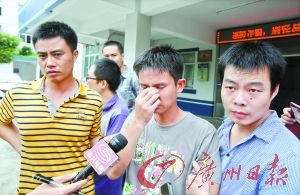 Huang, picured above, said he might hire lawyers, because no official has attempted to explain to him what exactly happened.

According to a statement issued later by Nanshan district government: “Police, firemen and ambulances rushed to the scene at 4.59am after they received a report at 4.54am … But torrential water metres deep made it difficult to reach the car.”

Another car was trapped under the same underpass in 2011, SCMP continues.

The driver sat his roof until police came. Tong’s death showed that authorities did not keep their promise, the Shenzhen Evening News said.

Woman dies in Shenzhen floods after making final phone call to husband (The Nanfang)
‘How could they not reach my wife?’… (SCMP) (Images via)