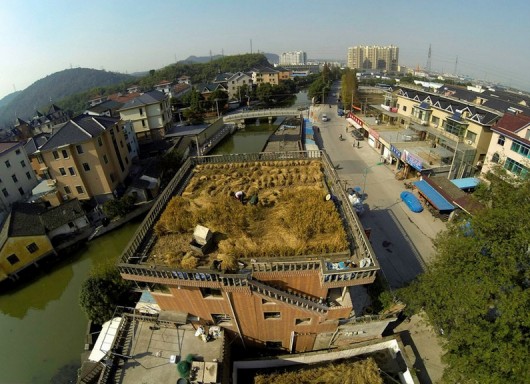 A farmer in Shaoxing, Zhejiang province has discovered that — for him, anyway — planting crops on the roof of a four-story building increases yield. Are we set for another agrarian revolution?

Probably not. This is still interesting though, another in our ongoing “weird stuff on the top of Chinese buildings” beat. Hug China has this via Xinhua:

Peng Qiugen, a Shaoxing native, transformed the 120-square-meter rooftop of his house into a farmland several years ago. Since then, Peng has tried to grow rice, watermelon, vegetables and other crops on it and the experiment proved to be fruitful.

Last year, Peng harvested a total of 400 kilograms of watermelon on this small patch of “sky farmland”, boasting of a 30 percent higher yield than a ground-level land.

Peng says the higher output is due to the compact nature of the plot, “which makes the problem of water loss and soil erosion less severe than a normal farm.” Not knowing much about farming, I suppose that makes sense. Although maybe it’s just easier taking care of a such a small space.

Interestingly, authorities have not told Peng to quit his shenanigans. Somewhere, a wealthy quack scratches his head. Just wait until the water begins leaking.

“My greatest wish is to save more land for China by promoting rooftop farming to more households,” Peng told Xinhua.

He calculated that a roof as large as his, if used for growing vegetables, can meet the daily demands of 20 people.

…Better sunlight and fewer pests are the “recipe” for the high yield and good quality of Peng’s crops.

Every year, he uses the rice for wine-making, and shares the rest with relatives and friends, including those who used to call him a “fool” when he decided to develop the rooftop farm.

In 2010, his “sky rice farm” was awarded a gold medal during the World Green Roof Conference in Shanghai.