This is cool and all at first glance, but let’s call a spade a spade: it’s illegal, and not so cool if you’re living underneath this rooftop villa, i.e. inside the 26-floor apartment building.

Somehow, the rich bastard who built this — a medical practitioner (quack?) with a private business (definitely quack) known as “Professor Zhang” — has accomplished the nearly impossible: made us root for chengguan.

Check out the above video about this construction in Beijing’s Haidian district. When Zhang moved into his penthouse duplex in 2007, Room 2605, there was a deck upstairs, and after getting the proper permits, he began renovating it into something… bigger. In December 2008, local authorities notified him that he had to stop, because his project was causing water and gas leaks. Did Zhang listen? Did he stop to think about others? Did he use a bit of rational thinking?

Nope, he expanded it to 800 square meters, and added rocks, a swimming pool, and private lifts.

“I think he just has money and do whatever he wants to do,” apartment owner Lee Xiaoming told Al-Jazeera. “One day, more people feel uncomfortable about it, we will stay together and get him to clean it up. And that’s all we can do.”

All the relevant chai (demolish) notices have been posted. If Zhang doesn’t turn up soon, authorities will go in and tear it down themselves.

“A culture of impunity for the wealthy and well-connected,” Al-Jazeera’s Harry Fawcett says. That’s Zhang. That’s the worst of your entitled expat friends. That’s fu’erdai like the yayaya girl. Don’t root for this.

Local newspapers have identified the owner as Zhang Biqing, a doctor of traditional Chinese medicine and former member of a district People’s Political Consultative Conference who owns a national chain of acupunture clinics.

…When confronted earlier by reporters from local newspaper Beijing Morning News, Zhang, who sometimes identified himself as a professor, had said, “Since I dare to live here, I am not worried about complaints.

“Famous people come to my place and sing. How can you stop them?” the newspaper quoted him as saying about the noise at night. 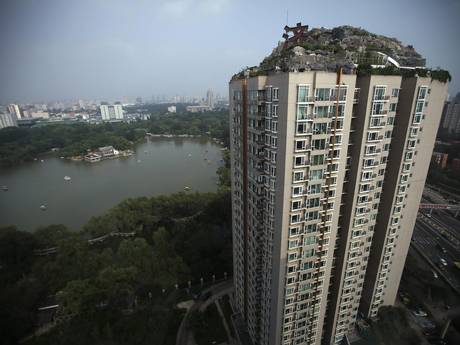