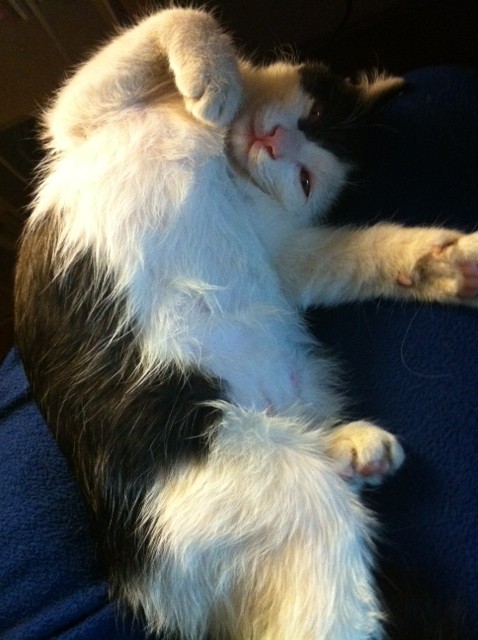 One of the study’s co-authors, Fiona Marshall, an archaeology professor at Washington University of St. Louis, said in a Wash U press release: “Results of this study show that the village of Quanhucun was a source of food for the cats 5,300 years ago, and the relationship between humans and cats was commensal, or advantageous for the cats.”

We’ll note, very briefly, that the study was based off work by Chinese researchers at the Chinese Academy of Sciences, who seem to be slowly uncovering evidence that everything in the world originates from China. But we don’t really have a reason to doubt these findings, and indeed that’s not the point of this post. Let’s take a moment to admire cats even more than we already do. After all, those afflicted with Toxo — brain cysts that cats gift us (not to be confused with the carcass of that bird on your doorstep) — are better, stronger, wiser people.

Here’s how the study was done:

Using radiocarbon dating and isotopic analyses of carbon and nitrogen traces in the bones of cats, dogs, deer and other wildlife unearthed near Quanhucan, they demonstrated how a breed of once-wild cats carved a niche for themselves in a society that thrived on the widespread cultivation of the grain millet.

Carbon isotopes indicate that rodents, domestic dogs and pigs from the ancient village were eating millet, but deer were not. Carbon and nitrogen isotopes show that cats were preying on animals that lived on farmed millet, probably rodents. At the same time, an ancient rodent burrow into a storage pit and the rodent-proof design of grain storage pots indicate that farmers had problems with rodents in the grain stores.

Other clues gleaned from the Quanhucun food web suggest the relationship between cats and humans had begun to grow closer. One of the cats was aged, showing that it survived well in the village. Another ate fewer animals and more millet than expected, suggesting that it scavenged human food or was fed.

Researchers are now asking where the first domestic cat came from. Per the Wash U article, DNA evidence suggests “most of the estimated 600 million domestic cats now living around the globe are descendants most directly of the Near Eastern Wildcat, one of the five Felis sylvestris lybica wildcat subspecies still found around the Old World…. ‘We do not yet know whether these cats came to China from the Near East, whether they interbred with Chinese wild-cat species, or even whether cats from China played a previously unsuspected role in domestication,’ Marshall said.”

If you’re looking for the China joke here, don’t bother: Samuel Wade of China Digital Times already has you covered:

The new study does not reveal whether it mattered at this early stage if the cats were black or white.

The name of the cat pictured above is Little One.

Cat domestication traced to Chinese farmers 5,300 years ago (Wash U, via The Atlantic)

9 Responses to “Cats May Have Been First Domesticated In Shaanxi, China”