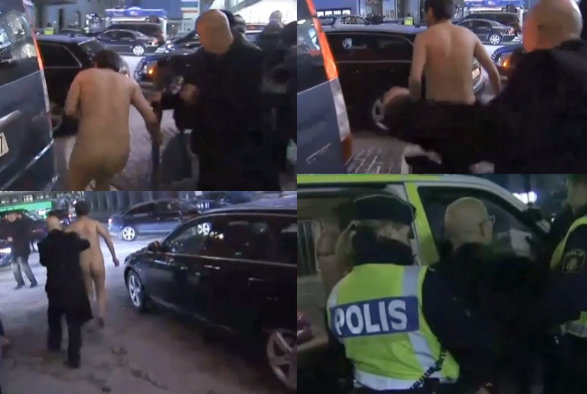 That last video we just put up of a man streaking outside the Nobel Banquet Hall in Stockholm wasn’t just some prankster after a laugh, or a drunk man who’d lost his wits. It was part of a coordinated protest featuring none other than Liao Yiwu, author of The Corpse Walker and the recipient of this year’s German Peace Prize. He’s the one wearing a black overcoat who ushers the streaker, Meng Huang, over the cordon, and then tells him (clearly audible in the video) to “run.”

Apparently Liao, who lives in Berlin in exile, travelled to Stockholm on Monday with Meng, an artist, according to Scandinavia Today. Sven-Erik Olsson, a spokesperson for the Swedish head police, said Meng was rowdy and drunk, but those charges have since been disputed.

SVT News reports that a photographer on site, Mikael Eriksson, said he smelled absolutely no alcohol on Liao when they hugged before the streaking happened, and that “they both behaved calmly and in good faith.”

Apparently Liao and Meng were at the ceremony to see whether Nobel Prize in Literature recipient Mo Yan would present an empty chair for jailed dissident Liu Xiaobo. The empty chair was first placed for Liu at the 2010 Nobel Peace Prize award ceremony in Oslo, Norway to symbolize his absence because he was serving an 11-year prison sentence in China.

When no chair was brought out, Liao and Meng sprung into action.

Liao, who spent four years in a Chinese labor camp himself, has been one of the most vocal critics of Mo winning the Nobel. Asked if he’s met Mo, he replied:

Yes, he once visited Chengdu and we met there. After that there were a number of opportunities for us to meet but he always avoided me. He knows that he represents a superficial China, one that can seem very glossy. Whereas I stand for a grassroots China, its dregs, its dirt.

As quoted in Sweden’s major daily, Dagens Nyheter, he called Mo’s award “the Nobel prize’s biggest dishonor in a hundred years.” And as paraphrased by the BBC, Liao said he was “shocked that Mo Yan won, because he is too closely associated with the establishment.”

He’s now taken things into his own hands. The news, for whatever reason, has yet to spread to English-speaking media. We’ll see if that changes soon.

UPDATE, 4:09 pm: A translation of that SVT (Swedish state television) story comes via one of our readers:

The background story to the nude action, which attracted a lot of attention last night, involved Liao Yiwu, Meng Huang and an additional regime critic who had planned a protest action against Mo Yan being awarded the Nobel prize.

The plan was to bring a chair for Mo Yan to give to the jailed dissident Liu Xiaobo. It would symbolise the empty chair meant for Xiaobo when he could not attend the Nobel Peace Prize ceremony in 2010, due to him being in jail.

But since the chair never arrived, the artist trio decided to perform a different action. In central Stockholm, Huang got undressed and jumped the fence, dashing toward the concert hall, cheered on by Liao Yiwu (the man in the black coat in the video).

2 Responses to “That Streaker At The Nobel Banquet Was Artist Meng Huang, Accompanied By German Peace Prize Recipient And Chinese Exile Liao Yiwu”