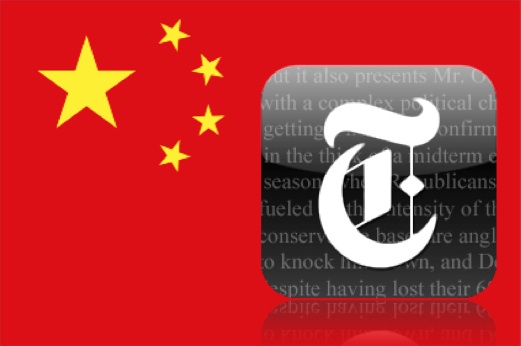 “Is Beijing about to Boot the New York Times?” asks the headline to this Foreign Policy article (not paywalled!) by Isaac Stone Fish. It’s a fair bit of speculation: 12 Times journalists are apparently anxiously waiting for their annual visa renewals, as revealed by two sources speaking to FP on background. (Emphasis on either “anxious” or “still waiting,” depending on your level of cynicism about media / China.) About a dozen Bloomberg journalists are reportedly in the same boat.

The current round of difficulties began, the reporters said, after the Nov. 13 publication of a story about J.P. Morgan Chase’s alleged link to Wen’s daughter. “My guess is they concluded in recent weeks that they needed to take another step because they thought we hadn’t gotten the message,” one of the journalists said. The other concurred: “Everything was going fine” until the second Wen story came out.

Of course, the speculation could also be called premature. Kicking out a paper of the Times’s stature would be a huge embarrassment to China, any reasonable person would think. One of the interviewed NYT reporters called it the “nuclear option,” suggesting that, despite the recent commotion, China may not be willing to go that far. Why would the country risk this becoming a diplomatic issue?

On his trip to Beijing in early December, U.S. Vice President Joe Biden raised the issue with Chinese President Xi Jinping, and publicly chided Beijing, saying the United States has “profound disagreements” with the “treatment of U.S. journalists” in China.

“I think Biden’s mention helped,” said one of the New York Times reporters. “It put it at the top of the agenda, and let the Chinese know that there would probably be repercussions.”

Then again, the Chinese government doesn’t “play nice,” said one of the NYT reporters. Yeah, thing is, political journalists don’t either. This will be an interesting story to follow.

Is Beijing about to Boot the New York Times? (Foreign Policy)

Also see: The New York Times Has Lost $3 Million In Revenue Since China Blocked Its Website