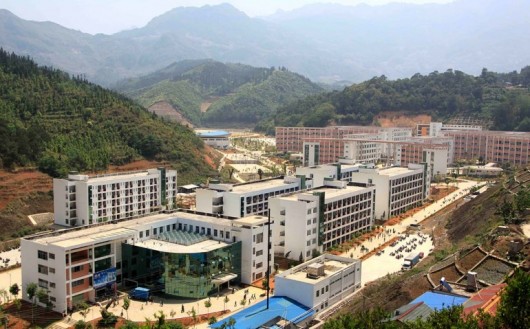 Via Beijing Today: “Malipo County in Yunnan Province has been on the poverty list for decades. The county spent 300 million yuan building a university campus in the valley to attract students. But none have ever attended.”

The China Dream is in trouble according to a recent report by The Mirror. The investigative report, published on February 7, said the number of impoverished counties in China rose from 331 in 1985 to 592 in 2012.

This purported slide into poverty runs contrary to three decades of explosive economic growth and seriously clashes with the government’s official reporting of 98.9 million people in poverty nationwide.

But rather than unmasking a hidden class of impoverished citizens, The Mirror’s reporters may have stumbled up one of the nation’s most audacious channels for corruption.

In 1985, the central government put forward a policy that would replace handouts with generous funding for projects intended to “develop the local economy” in China’s poorest counties. The incentive was designed to bring the countryside in line with the nation’s greater market reforms.

Initially, “poor counties” were defined as those where the average annual household income was less than 150 yuan: $51 at the time, or $110 in today’s money.

The nationwide average, by comparison, was 858 yuan per household.

The number of listed counties has grown slowly in the years since. In most years, about 30 counties graduate from the list to be replaced by new developing regions.

On the surface, the policy appeared to be working. In 2012, the government revised the policy and bumped the baseline average household income to less than 2,300 yuan per year.

But the poverty list is based on self-reporting rather than census data, and local officials have a strong incentive to present their communities as ailing to tap into the vast cash reserves of the central government.

Many “poor counties,” especially those along the eastern coast, applied for poverty status to win subsidy money for bogus projects.

An increasing trend in corruption over the last decade resulted in billions of yuan earmarked for good causes to pour into the pockets of county officials.

Little evidence exists that any subsidy money was used as intended.

Taiqian County was awarded an annual budget of more than 80 million yuan in 2011 – a year when its average annual income was 7,200 yuan in the cities and 2,650 yuan in the countryside.

As government officials built themselves luxury apartments and a new massive administrative complex, more than 600 students were left packed into one small dormitory. Their classrooms had no windows to shield them from the elements.

When reporters asked school officials why the classrooms did not have windows, they were told the school could not afford them.

The school was located next to the new government complex.

Wang Jingbo, deputy director of the Chinese Law School, said that the central government is revising its poverty targets to move more wealthy counties off the list in hopes that the funds go where they are truly needed.

“We have to focus our spending on real projects that push development in the right direction,” he said. “This phenomenon can’t be allowed to persist.”

One Response to “For County Officials, Poverty Is A Mask For Corruption”