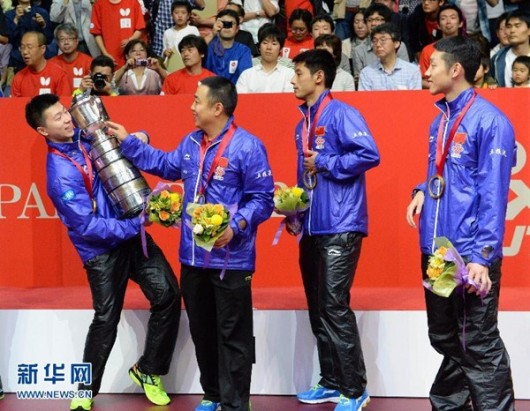 For the seventh consecutive year on Monday, the Chinese men’s ping-pong team won the Swaythling Cup. (Apparently familiarity doesn’t make the trophy any less awkward to handle.) It’s the 19th time they’ve finished first at the World Table Tennis Championships, which was held this time in Tokyo. The Chinese women’s team, not to be outdone, also won – also its 19th team title at this worlds competition. The women have lost only twice since 1975.

I mean… congratulations? No team title should be disparaged, especially since it looks like Team Germany gave China a bit of resistance, actually taking one game before falling 3-1. But, man, seven in a row and 19 total… maybe it’s time to give the Chinese a handicap? Like, smaller paddles, or ankle weights, or something. Look:

China’s domination of the sport extends to the Olympics. The kids here grow up with ping-pong and do stuff like this at the park, so it’s not a surprise that the rest of the world has no chance in international competitions.

Good luck next year, everyone else. But honestly, it probably won’t matter: 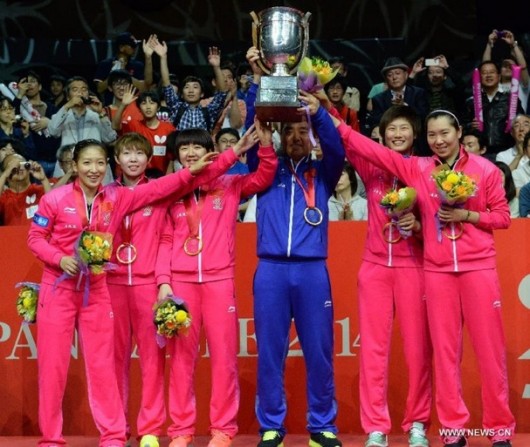 …Japan bars all trade with North Korea. It has banned all exports to North Korea and port calls by North Korean vessels due to Pyongyang’s nuclear tests and missile launches since July 2006.

The Japanese government generally prohibits any North Korean nationals from entering Japan, but issued the players’ visas under the principle of separating sports from politics.