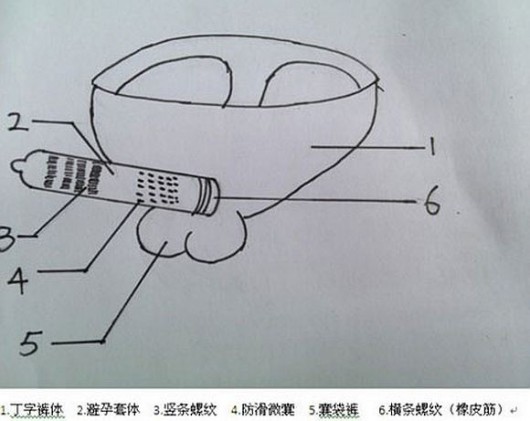 Last November, Bernd Chang wrote about a group of students who created a multifunctional G-string+condom featuring Chinese herbs (cumen, naturally?). We’re now here to give you this stone-faced update: that contraption has attracted more than USD $300,000 in investment from Guangdong Yuezheng Investment Management Limited.

If this Rocket News 24 report is to be believed, anyway:

The Eros Protector will come with a pouch that dispenses specially designed condoms that actually screw into place on the front of the thong. Apparently, instead of standard lubricant, these condoms also come equipped with a Chinese herbal blend lubricant that helps to maintain the pH balance of a woman’s private parts.

Yongxiang and team’s invention apparently shows so much promise it has attracted over US$300,000 in investment money from China’s venture capital firm Guangdong Yuezheng Investment Management Limited, who have high hopes that the risky investment will pay out due to the project’s creativity.

The diagram above looks like the doodle of a bored middle-schooler suffering through a history lecture, but in a country as shy about sex as China, maybe the Eros Protector can serve a purpose. Sex ed can come from unexpected places.

I just googled “What is the proper pH balance of a woman’s private parts” and learned, “Bacteria called lactobacilli help to keep the vagina’s pH balance at its normal low level (less than pH 4.5), which also prevents the growth of other organisms.”

By the way, the Chinese caption above reads: