A trio of Chinese men armed with baseball bats and metal pipes has been detained, following a violent assault on students at one of Beijing’s best-known universities.

The case bears strong similarities to a series of racially tinged assaults alleged to have recently occurred in several foreign-centric districts, including Sanlitun, Houhai and Wudaokou, in which foreign witnesses reported being attacked without provocation by local men carrying weapons and traveling in a vehicle. The incidents were widely reported on WeChat and discussed on local forums, such as Reddit, where many expressed concern about possible hate crimes. 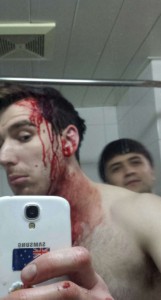 An Australian student, who asked to be referred to just by his first name, Michael – for fear of possible retaliation – was returning to his BLCU quarters at “around 2am” on 21 December with his Korean girlfriend, Christine, when he says the pair noticed a grey BMW parked ahead.

“We were about 200 meters away [from the university] when [the men inside] yelled out something… they came around in their car and stopped us at the gate,” Michael recalled. Aware of the rumors that a group of men were targeting foreigners with Chinese females, he confronted the gang in an attempt to defuse the situation, explaining: “My girlfriend’s Korean, not Chinese…”

Three men  then attacked him with bats and rods. “Once they started hitting me, I grabbed one of the bats and hit one of the Chinese guys back in the head” – an act he was to later regret –  “and then approached the other two guys… yelling at them to leave and they backed off. I smashed the bat in half,” explained the former rugby winger.

Before he could check the third man, Michael said, he got up and, as the trio approached again, both students decided to run for help but “As we almost got in the dorm, my girlfriend fell down,” and the men renewed their assault. Michael claimed he remembers little of what happened next but CCTV footage shows him being battered on the head, then disarming another of his metal rod.

Inside, a large amount of students (including “a lot of Russian guys”) assisted the pair while others called the police. “One of the attackers who I’d hit tried to come in… the Chinese had gone to their car again and tried to escape” but fortunately a quick-thinking Russian had removed the keys, according to witnesses. At this point, police arrived. A member of the gang accused the Russian of attacking them, and all four were detained. 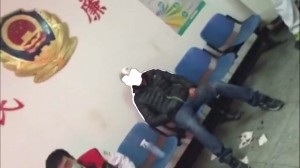 In a similar December incident, detailed over at the World of Chinese, a foreign student who requested anonymity told a reporter he was approached by a group of six or seven men in a “wagon” and carrying “metal sticks,” who questioned his companion’s ethnicity. “They started asking if my friend was Chinese,” he told the magazine. After being assaulted several times, the man handed over a small amount of money and made his escape.

The magazine spoke also to an eyewitness to “a separate incident in Wudaokou, who said that he saw ‘four Chinese holding bats chasing a black guy, shouting at him,’ along Zhanchunyuan West Road, at around 3 am the same morning.” The location of the latter incident is close (1-2km) to where the attack on Michael and his partner took place. Although extreme violence is rare, attacks on foreigners do occur in the nightspots of Beijing for a variety of reasons – examples from Sanlitun being not infrequent, and not necessarily involving Chinese.

Back at the police station, a bloodied Michael says he was threatened by one of the men (to wit: “I know where you guys live, I’m gonna come get you and stab you”) and endured racial slurs, and both he and his friends were accused of instigating the fight. The Russian was detained and later released the next day, while Michael received five stitches; his passport is now with police as the case continues.

“All three are now in jail,” said Michael. “However, if we can get more witnesses, they’ll serve a longer time in jail.” In legal terms, the men have been detained pending investigation. They can be held for up to 28 days without charge and should police decide to press charges, a case will be sent to the “procurator” for consideration. If the case is accepted, a trial will be set and the assailants can look forward to tackling China’s 99.1% conviction rate, instead of unarmed foreigners. 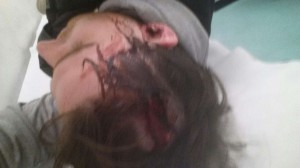 Michael praised both university authorities and Wudaokou police, who he described as “helpful [and] good” but added that the embassy was “useless.” The investigation is ongoing and “slow.” One potential difficulty might be “the injury suffered to the other man, he was in hospital for a while and looks like he is permanently a bit deformed.” The man is alleged to be an American citizen, though both his parents are Chinese.

Readers who have any information about the case, know of any other incidents, or were themselves victims of one of a similar spate of attacks involving a grey BMW in the last two months are urged to contact Wudaokou police, or email us at the usual address (and we’ll pass your details on). Said Michael: “All I want is this not to happen again.”

50 Responses to “ARRESTED: Beijing ‘gang’ alleged to have targeted foreigners with bats”