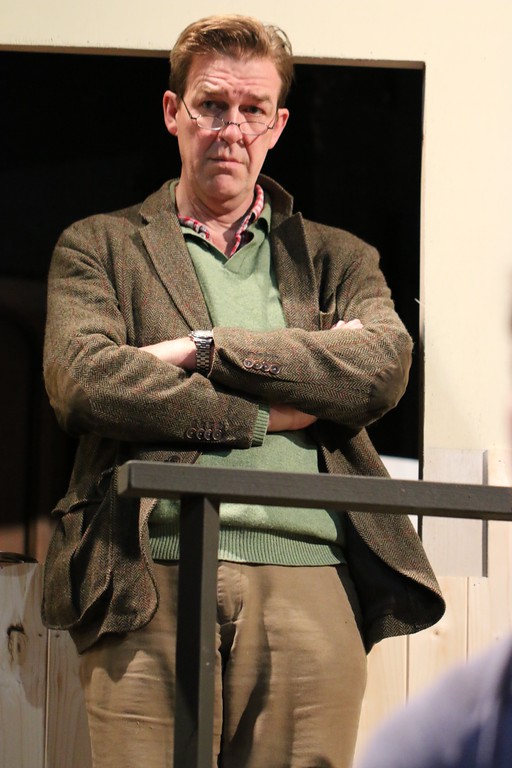 The author, trying to look academic

A year after leaving China and five years after publishing his first book (China Cuckoo: How I Lost a Fortune and Found a Life in China), Mark Kitto has a follow-up, That’s China, technically a prequel that traces the beginning of his That’s magazine franchise and looks underneath the fingernail of Chinese publishing. Kitto wrote the following column for Prospect, republished here with the author’s permission — with a freshly appended postscript.

From 2008 to 2012, I wrote a column for Prospect called China Café about life on a Chinese mountain, Moganshan, near Shanghai. In 2013 I left China, having written a final sign-off article, You’ll Never be Chinese. My basic argument was: “The Communist Party has destroyed civil society, the education system sucks, and there will be a major upheaval, economic and social, very soon, so I’m off.” Once it was published, I found somewhere more congenial to live, the coast of North Norfolk, which has been my UK base for most of my life.

I’ve been home now for 18 months, one month for every year I lived in China, and I am beginning to understand China again in a way I had forgotten. I have returned to the China Dream. It’s all around me, even in Norfolk. Young people tell me with breathless excitement how they are studying Mandarin at school or have a trip to China planned for their gap year. Can I help with language practice, travel advice, an introduction to an internship, a job in the mountain-top coffee shop which my Chinese wife Joanna still runs from Norfolk?

Then there are the adult dreamers. The parents pushing the children at me, the local businesses wanting to “break into the China market,” the businesses being courted by Chinese investors, the Norfolk attractions wanting to pull in Chinese tourists.

Most awkward are the conversations with the people in charge of the attractions. They’ve read about tourist boom from China and want a share of it, but Norfolk has no duty-free shopping village, no iconic British landmark and when the royal family are here, they hide. I don’t think there will be a flood of Chinese tourists coming this way any time soon.

The business people are more realistic. I’ve met several who’ve had their fingers burnt in China. They enjoy hearing how I had mine chopped off and stir-fried. It makes them feel better. Those still engaged or committed to China are more taciturn. They fall into a strange silence when I ask them how they are getting on.

The worst dreamer — the dream-makers — are the mainstream news media and the government. Soon after I returned home in 2013, the Education Minister Elizabeth Truss visited China and raved about the superiority of the Chinese education system—the same oppressive, creativity-stifling system that drove my family back to the UK. Thanks to her being a local Norfolk MP, and local schools reportedly in a dire state, the coverage was extensive. Yet my children have been transformed since they left the Chinese system and entered the British/Norfolk one.

In China they spent the entire 12-hour school day at their desks, ate their meals at them, and took tests, and mock tests, and revised for tests. It was not an education. They were learning how to pass exams. They suffered mentally and physically. My son’s mild learning “problem” went undiscovered.

Here in Norfolk they have blossomed. They enjoy school. My son’s problem has been identified and dealt with. Where he used to hate reading, he now wants to show off his skill. The pair of them have discovered team sports, and love them. (The Communist Party of China does not like teams, other than their own.)

While sections of the UK media are at last beginning to ponder the potential downturn in the Chinese economy — the repercussions of which no-one dares quantify with any accuracy, if that were possible — still the government and most of the media talk up the “China Dream,” a phrase coined by President Xi Jinping. According to one report, British investment in China is due to quadruple. China invests more in the UK than any other EU country, according to the government. The British establishment think we are marching with Mao’s legacy towards some sort of economic Shangri-La.

Combining education, investment, and the dream — the word was in the title of the piece — all in one, I read with horror a recent article in The Telegraph by Anthony Seldon, the Master of Wellington College, describing what “fun” it was to open British branded schools in China, how America was on the way down, China up, and we should all, like him, be learning Mandarin.

Now I understand why I used to meet so many outsiders trying to get into China, as I had once done myself — a very different China, before the modern Party ruined its chances, 30 years ago. They all believe in the dream. And having spent so long there myself, working with one of the most efficient propaganda — dream-peddling — machines in the world, I have been reminded that telling people what to think is not a political practice exclusive to totalitarian states. Democratic ones do it well too, perhaps even better.

When one of the most respected educators in the country admits to being a window-staring daydreamer perhaps I should think twice about bringing my children home for school after all. At least back in China there was no point staring out of the window. The air was so polluted you couldn’t see anything.

I’m due to give a lecture on “Doing business in China” at the end of this month. I joke it will be one word long: “Don’t.” Of course it won’t be. The students have been given my book to read so I hope they’ll have some questions. But it will be tempting to round up five minutes early and tell them: “My final word on doing business in China: turn to that window, look outside, and start dreaming.”

Not that I wasn’t hoping it would be, but the feedback to the lecture, duly delivered to eight (mostly interested) undergrads on a business course BA, was along the lines of: “Well that was different.”

Transpires that the previous nine lectures (I was given the prime slot of the tenth and final one, quite by chance) were the more usual and upbeat “we must all engage with China and this is how and it’ll be a challenge but don’t worry I’m going to tell you how to avoid all the bad stuff and the best way to do that is ignore it and get on with giving you the China Dream because that’s what you’re here for…”

As ever, and as I wrote in the article above, the British media were a handy teaching aid. A couple of days before the lecture the Telegraph ran a story titled, “It’s time for the world to adjust to China’s global ambition,” whose main peg was the “longest bridge in the world… across the Yangtze Delta.” Apparently the Yangtze Delta is 102 miles wide. It wasn’t when I drove over it in 2013 on my way home to the UK. A modicum of research reveals the “bridge” is in fact a particular stretch of the elevated viaduct above the rice paddy on the Beijing to Shanghai gaotie. And we all know why the gaotie is elevated. It’s because the government is terrified of the peasants whose land it would have to otherwise requisition and all the social instability that might follow. Hence the vast additional expense of sticking the entire Chinese rail network on top of concrete pillars.

(Next up in the ever-reliable Telegraph: On 13 April a hilarious piece of puffery about the Shanghai stock exchange ending with the words: “As they say in China, it will make for interesting times.” They don’t say that in China. The author is misquoting, as do countless other Western journalists: “May you live in uninteresting times.” Uninteresting is safe. Idiots.)

I could write a regular column about the latest tripe to be spouted by the British media about China. It’s regular and relentless, yet would soon become uninteresting.

Back to my students. They wrote nice thank-you emails. They still want to do business in China, but they say they will be more cautious, and better prepared. They will even recommend that I come and talk to the next year’s course. I appreciate that.

Seems like there is a market for China Reality, despite the efforts of the British establishment.

Mark Kitto’s newest book is That’s China, available on Amazon and select bookstores in Beijing and Shanghai (including The Bookworm and Garden Books).

36 Responses to “Mark Kitto, Back To China Dreaming”