There are many things I love about China. But the thing I really, really hate is that they occasionally make me stand up for things I can’t stand. Like the French.

Normally, I would just make fun of the French and their chocolate-bread-eating ways, but in the face of such madness from the Global Times, just call me TAR de’Gaulle.

Every time social order is disrupted anywhere on Earth, the Chinese rags go nuts, bleating that democracy doesn’t work and that it would never work in China.

And now they are taking a crack at the French.

What was wrong with the French elections?

The Eiffel Tower didn’t morph into an angry Beast of Gevaudan, and frogs in wheelchairs didn’t riot in the streets.

They had a presidential election, and voter turnout was 80%. Socialist party candidate François Gérard Georges Hollande came out on top — but just barely, with 28.63% of the vote — and conservative incumbent Nicolas Sarkozy came in at 27.18%. The only other contender was at 17.90%, and the other seven candidates took the rest. The matter will be settled in a second round of elections as it always is.

But the Global Times saw a good opportunity to point out that democracy and intellectual diversity are a waste of time and resources.

The editorial calls France’s democratic elections a “lengthy party, paid for by the political system.”

Of all the cruelties from the Chinese propaganda machine, fake condescension is probably the most infuriating. A party?

Yes, elections can get a bit silly. The people in democratic nations make their leaders squawk like chickens for their supper. This is true. Image is key in elections, but essential in presidential elections. This is something the editorial states explicitly: “candidates’ personalities, their wives, and their ability to please the public have become more important.”

This is what happens when you apply for a job. It’s unfair, stupid and wasteful, but it’s human nature.

But what is going on in France is a microcosm of what is happening elsewhere in the free world. Government funds or privatization? Austerity or investment? Regulation or deregulation? Immigration or protectionism?

The editorial also complains about “slinging mud.” Yeah, that happens too. You see, in democracies, we don’t often have all-purpose hate figures, at least not for long. The speech is given, life goes on, and people can’t even remember why they own the domain name BobDoleisashithead.com. When there is a war on, people like Saddam Hussein and Osama bin Laden become hate figures for a while until they die, win or cease to matter.

But when politicians are hated in a democracy, it’s for the things we hate about the people around us. That racist old prick who lives downstairs, for example. You can’t just go down stairs and punch him for being a racist or set his cat on fire. But you can spit at your TV when his uber-rightwing representative is on the screen. No one actually hates George W. Bush. They hate what and who he represents.

Everyone calls each other rednecks and hippies and then goes home feeling a little bit better to have “helped.”

I think this keeps a country sane. Otherwise you’ll start inventing a litany of people to hate, imaginary creatures full of lies and cunning.

This editorial has the same broad insults for democracy and countries with democratic governments that these pieces always do, like, “The Western-style democratic system needs reform.”

I find it hard, as a man of learning and letters, to not just say, upon reading something so oblivious, so insanely vague, so insulting: “I’LL REFORM YOUR FACE!”

But what face? Who do you imagine is responsible for this train wreck of an article? As a man of integrity, I shall treat this matter with the utmost respect. 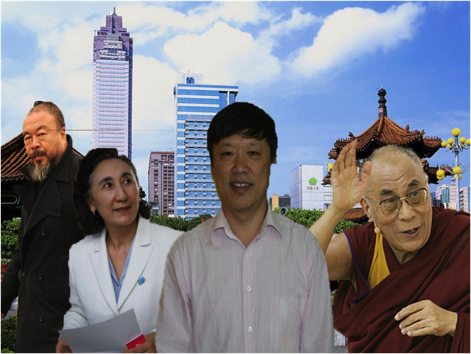 That’s right, it’s our good friend Hu Xijin again. Remember him? The cunt responsible for pissing on a dead man’s corpse. The Editor-in-Chief of the Global Times. The above picture depicts him at a symposium called “Taiwan is Definitely Not Part of China” with the Dalai Lama, Rabiya Kadeer and Ai Weiwei, where he met his friend Bo Xilai and had a cup of tea with Satan.

I really, really hate this guy. Not his politics, not his writing, not even his paper. Him. His soul.

Of course democracy needs reform. It is a system that promotes constant reform, which is why democratic countries don’t need bastards banging on every day about the reform that happened 40 years and the reform that will ostensibly take place at some future date. Just one day I want to open a paper in China and not be assaulted with the “opening up.” It was 1978! We’re talking about a year that had Dawn of the Dead, Deer Hunter, Invasion of the Body Snatchers and Animal House. If you say with a straight face that the “opening up” was anywhere near as good as Animal House, we will come to blows. Do editorials in democratic countries mention Animal House every day? No. And the “opening up” wasn’t a brilliant idea. Other people thought of it, they just didn’t want to die. And instead of a big pat on the back for it, why don’t you look for the bastards who did the “closing up” in the first place and burn them at the stake?

He also states, “Chinese society is sincere in learning the essence of democracy.” Well, now that I know you speak for the whole of Chinese society, let me say this: You’re a big fucking liar.

The last bit of this short editorial I want to take to task is this: “A few diehard Chinese followers of the system (democracy) refuse to admit them (problems), even against rational discussion of these problems.”

How dare you. “Rational discussion”? 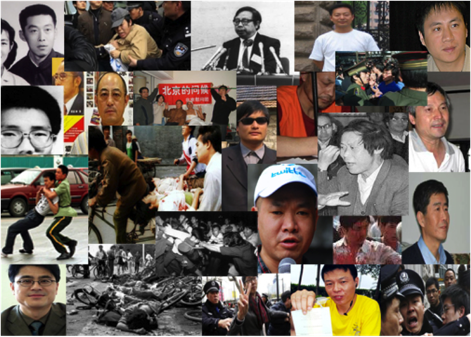 In summation, nothing at all bad happened at the French elections. A new leader will likely come out of this, and no one had to die. That, to me, is pretty cool, especially when you consider the millions the Chinese Politburo could kill in their death throes. Sure, democracies in different nations have their own problems, but the Chinese media will also kindly note that there were no riots, and good god do the French love a good riot.

The French election was nothing special, so it hardly deserves kudos, but in the face of Global Times, I will say this: take us home, Viktor Lazlo.

8 Responses to “To Serve People: In Defense Of The French, At Least Hu Xijin Isn’t French”