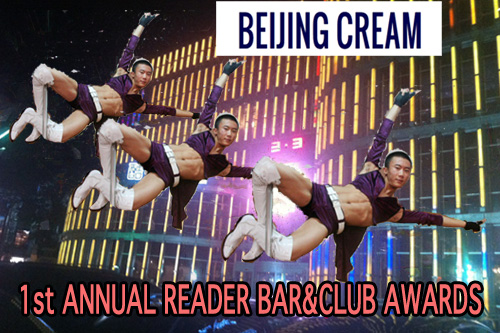 Six days ago we introduced the 1st annual Beijing Cream Bar and Club Awards (image credit Katie), with 22 questions divided into five categories. On Friday, Drake wrote about the Sex category, and it seemed only fair that we balanced out his perspective with a girl’s. Here it is.

By One Night in Beijing

Club with Lighting Most Conducive to Concealing Physical Defects

The type of lighting most conducive to concealing physical defects is called alcohol. All places above are well equipped with this, but at Propaganda it is SUPER CHEAP. Oh god. So cheap! I think I paid something like 45 RMB for two vodka tonics (the drink to have if you just want to get drunk and not stain your teeth or get fat on liquid sugar and just feel like you’re drinking iced water). Interlaced with tequila shots. Everyone starts to look good pretty fast. Unfortunately, everyone is also, like, twelve. Or creepy old people ogling twelve-year-olds, like me. What kind of statutory rape laws are in effect here, again? Any?

I’ll be talking about the female equivalent of blue balls here. I guess that would be, like, a really wet underwear. The thing you have to understand about any blue-ball situation is that the girl isn’t getting any either — she can’t be feeling good about that. Take this from me, girls are sluts. We can’t wait to jump on somebody, sometimes any body. So guys, if you end up not getting it on, it’s because you did something stupid to fuck it up, even if you’re not even aware of what’s going on. What kind of thing you did to fuck it up depends on where and how you met this girl, which is why the above is a great list.

Let’s use Bookworm as an example. I think to call Bookworm a bar is a misnomer. It’s really a cafe that sells alcohol. What kind of girls come to a place like this? Girls who arrive with their little laptops, gather a pile of arty showy-offy books, sit down and order a strawberry milkshake and then spend the next four hours chatting with their BFF on QQ and total strangers within 100 meters on Weixin. You can pick out these girls right away because the book on the top of their pile has been open to the same page since three bathroom breaks ago. You guys, they definitely want you to pick them up; otherwise they’d be chatting on QQ and Weixin at home. However, if they wanted you to pick them up with the same line you’d use at Mix/Vics (“Hey. You. Speak English?”), they’d be at Mix/Vics. Be a little more crafty here, guys.

What these girls want from a guy who hits on them at Bookworm is the showing of promise. You don’t actually have to have any promise. Just perform a little teaser demonstrating the ability to hold a real job and interesting postcoital conversation maybe. There is nothing worse than lying naked in bed with a guy who starts blabbering about cab drivers and jian bings and stuff. (“Wow, that was great. Do you like jian bings? I love jian bings.”) This one guy once came over and asked me to read this book or script or whatever he was writing. Sadly, his writing sucked balls, which I told him straight up and advised him to give up writing immediately and forever and go do something productive and common like private equity or noodle making. He was totally upset but got up the nerve to ask me to dinner anyway. Let’s just say that, were his actual writing not so terribly worthless, I’d have let him buy me a sandwich or something.

Where a Lay is Most Likely Followed by Postcoital Triste, Probably Because You Paid for a Hooker

As a girl, it’s a terrifying thing to go to a place full of hookers, not to mention kind of unproductive. Some guys don’t give you any attention because they want a sure thing with the hookers. Some guys give you too much attention, making you wonder if they think you are a hooker. Some guys would like to squeeze hooker services out of you for free. These are the worst; I hate cheap bastards.

No place is more infiltrated with hookers more densely than Maggie’s. You walk in, you know what’s going on. It’s a circus with a Filipino cover band and busty Mongolian women, and I’m down with that. They also have great lamb skewers, if you like to snack during your entertainment, which I do.

But for girls, postcoital triste usually results from a different kind of moment of weakness. There are usually all these guys lurking around trying to get into our pants, from which we defend ourselves nobly almost out of reflex. There are certain poisons against this reflex, though: alcohol, horniness, loneliness, just-ran-into-some-asshole, you name it. When this happens, lots of girls just end up finding comfort in the bed of whatever guy is right next to them. This could happen in any place, but it usually happens at McDonald’s at 4 am, and inevitably ends up in remorse around 9:30 am. Life is not How Harry Met Sally, you guys.

Obviously, women have a close relationship with this category as well. We love being taken advantage of. Everyone does. Without the places in this category, I would probably still be a virgin.

Just as I think alcohol is the best lighting, I think distance is the best for drunken-advantage-taking.

As we all know, when you get into a cab with someone at the end of the night, unless this person is your wing (wo)man, the deal is on. Unfortunately, a lot of confusion surrounds the whole cabbing ordeal. Cabs are so scarce and chaotic around club-leavin’ time that people are quick to jump in anything that moves. If you don’t play this right, you may not end up in the right cab, and then you’d have no choice but to go home in a heap of confusion and loneliness.

But if you and the object of your desire are both going in the same direction to somewhere really, really far, then this person almost has no choice but to get in with you. Nobody wants to pay a 60 kuai cab fare when they could be paying 30. Or nothing. Women are budget-minded creatures. Guys: when you get in a cab, just give the driver your address, and the other person may be way too drunk to know what’s going on. They won’t know that the front door they’re walking into is not their own until too late. You just lock that door behind you. Those keys-only Chinese locks, so tricky.

Best Place to Find a Lay that Turns into Something More, For Better or For Worse

I have been to only two places on this list, and I’m ashamed to admit which ones. So I’ll just wing it.

The difference between men and women is glaringly obvious. A man’s greatest fear is that a lay will turn into something more. This happens to be a woman’s greatest dream. I don’t know why so many books have been written on this stuff, like men are from Mars or Jupiter or wherever and women are from the moon. In Beijing, “something more” is always bad. Co-workers are constantly asking me for Ibuprofen in the mornings, which I always have.

The key to dealing with “something more” is not where you pick up a person, or get picked up, but how you manage expectations. Here are some quick tips:

To the guys: If you want to get rid of a girl right after the lay, you just turn around and start texting her BFF. Ask the BFF to get ice cream and then a massage. They will both be disgusted, but the BFF might not be disgusted enough to decline. What happens then between the two of them is not really your problem, but rest assured girl #1 will not be expecting an engagement ring from you anytime soon.

To the girls: If you want to lock down some dude after a lay… you can’t. Give up. In the alternative, you can exhibit an insane amount of stalk-y behavior and hope that this man will give in out of sheer exhaustion and defeat. This totally worked for one of my friends who wrote her then-bf 25 emails a day after he dumped her, and finally they got married and she’s now a housewife with two kids, if that’s what you’re after.

The writer is a New Yorker who has been living in Beijing for the past year. She started the website One Night in Beijing last November.

You can vote for the bars in the Sex category and the four others – Dross, Repugnance, Alcoholism, and Meta — right here:

One Response to “BJC Bar And Club Awards: A Female Perspective On The “Sex” Category”