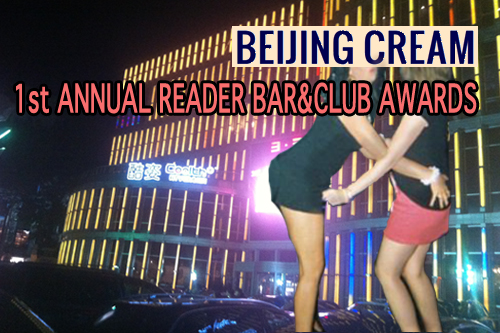 Tao has dedicated this week to his own narcissistic BJC Bar and Club Awards. If you’ve seen any of his self-promo ads or heard any of his introductions over the radio, he never misses an opportunity to proclaim how he is the “owner and proprietor of BeijingCream.com.” [Ed's note: It's a Deadwood reference, asshole.] Well, now it’s my turn to stand on the soapbox and do some self-promo. Sex, here we come.

Club with Lighting Most Conducive to Concealing Physical Defects

This is a competitive category. I’m going to eliminate Lantern because it is a high-end club, as evidenced by its cover charge for men. It’s a well-known fact that clubs with covers tend to attract the best-looking women (at least the best-looking women that Beijing has to offer), so physical defects are lacking, relatively speaking. Meanwhile, Propaganda/Sensation and School Bar lighting, for me, just don’t cut it. I honestly don’t know where the fuck Youth Club or Poachers is. Tango is my pick. If not due to the process of elimination, then owing to the fact that the last time I was there, to see Paul Kalkbrenner, I woke up in the morning next to someone who looked like a Hanggai throat singer. I promise you she did not look like that when I first met her.

Blue balls suck. Plain and simple. They should not be blue. They should be clear. Clear of semen. Unfortunately, not all bars and clubs leave men with clear balls the next morning. Even if you do end the night successfully at The Bookworm or The Tree, your partner will probably not be experienced enough to flush your balls. The winner of this category is easily 2F. Evidence: once I brought a very nice and attractive Chinese girl, even bought her several drinks. We started dancing, she stroked my shaft, finally asked me to go in a cab with her home. We get to her place, and BOOM! She waves bye and disappears faster than John Travolta’s masseur. Blue balls like a bitch. Fuck you 2F!

Where a Lay is Most Likely Followed by Postcoital Triste, Probably Because You Paid for a Hooker

All the nominees listed here are valid. I have no qualms with any of them. But hookers are far too obvious at Maggie’s and Chocolate. Postcoital triste most likely occurs after nights at The Den because you brought home a rugby player who actually mistook you for a hooker. Suzie Wong’s, in my opinion, simply doesn’t have enough hookers. Xiu takes the cake. I’ve seen friends walk up to women at the bar or a table and get absolutely no response. Nothing. It’s incredibly rude. The women looked through them as though they were transparent, like Guagua’s intentions with Huntman’s daughter. Hookers can sniff a pauper from a mile away.

Obviously I have somewhat of a close relationship with this category. Indeed, most men do, but they’re just too polite (pussy) to admit it. The nominees here are interesting. We have a couple of dark horses, followed by some obvious favorites, with another semi-reasonable option at the end. The favorites are undoubtedly Mix/Vics and Propaganda/Sensation. While both deserve to take home the award, the real winner should be Punk. Drinks are always in people’s hands, because you’d look like an awkward hedgehog without one. The music gets everyone on the dance floor, because it’s too loud to have a real conversation. And when the music is awful, as it usually is, you feel more compelled to drink more, and that just leads to bad things. I was so drunk one time, a girl took advantage of me. Took me to the wall around the corner from the far right door and stuck my hand down her pants. That’s right, girls are shameless assholes, too.

Best Place to Find a Lay that Turns into Something More, For Better or For Worse

Quite a lot of options for this one, so I’m just going to state my vote and the reason: Salsa Caribe. Great music that is perfect for dancing. Even if you suck at dancing, oftentimes you can find someone willing to teach you, or who also sucks. Oftentimes it is very easy to turn this into a lay. And oftentimes, that something is for the worse. Case and point: one night I showed up there with a very promising Indonesian girl. I danced her cute ass from here to Argentina. On my way back from the bathroom, I stopped to talk to a girl by herself on a bench. After five minutes of small talk, I told her we should go back to my place for some more drinks, which was on the way to her place. Done and done. The “something more” was her accompanying me to work the next day, because it just so happened she was studying Chinese at a language school that was in the same building as my work. On the same floor. There should be a rule against that kind of shit.

Drake is the asshole who has a column around these parts. He can be reached at drake@beijingcream.com.

You can vote for the bars in the Sex category and the four others – Dross, Repugnance, Meta, and Alcoholism — right here:

3 Responses to “BJC Bar And Club Awards: A Closer Look At The “Sex” Category”