(In response to certain comments made regarding my constant profanity, this week’s column will replace caustic cursing with Elizabethan insults. Let’s take a look at our first whoreson mandrake.)

Yes it is. I know it is because I had it. First they told me that all the Indians had pie and turkey and got along just fine with the pilgrims, and then they said we killed some, and then it turned out that it was one of the most successful genocides in the history of humans.

All things considered, I think it was helpful. It taught me that people who tell you stories with happy endings are LIARS.

This is a story regarding Hong Kong’s wish to have or not have National Education, also known as “patriotic education.”

So how did “the West” fly all the way to Hong Kong to screw up national education? Apparently, opponents of this outdated patriotic claptrap “only allow using Western ideas to ‘brain-wash’ people but do not allow using the patriotism to ‘brain-wash’ the people.” 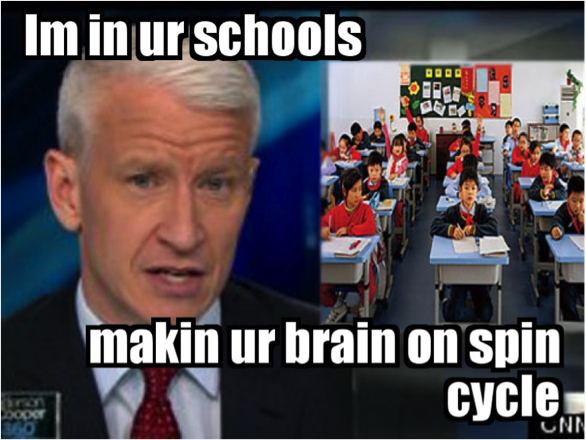 Digest that however you will, but I chose this story for this line:

The so-called “national education” is fundamentally equal to the “patriotic education.” Some politicians and scholars are afraid that the national education will “report only good news,” and therefore it will not make students know real national conditions and even turn into “political brain-washing”.

This appeared in the China Daily. China Daily. I’m gonna write that one more time: this appeared in the China whoreson Daily. I can honestly say, after reading this paper for several years, that they have never reported anything bad or politically sensitive in the entire history of my readership. If a sack of puppies fell out of the sky and smashed a baby duck, the headline would be “Expert: Duck, puppy embrace in support of China’s social development.” And now it speaks of “real national conditions”? Thou jok’st too much, crook-pated scullion.

I spoke previously about how China will scour the globe looking for people who support their warped point of view regarding international affairs and media. Hell, an editorial was published last Wednesday in the People’s Daily purportedly representing all the opinions of the Filipino media. Well, they didn’t have to search far for Bob Wekesa, who is and has been a Chinese apologist for a long time. He works just down the road at the Communication University of China as a “researcher.” I’m not sure what his job is, but I’m almost certain it entails sitting around all day knowing with exact certainty upon which side his bread is buttered.

This guy hates “the West.” A lot. I mean really hates, almost as much as Shan Renping. China is the ideal place for someone who hates “The West.” They should run classifieds: “Hate the West? Come on down to China. We’ll give you an office and a salary to spew vitriol, bile and hatred at everything said in the New York Times.”

He has published on how censoring the Internet is a good thing because the US has a worldwide conspiracy to control thought. He has published about how brilliant the Chinese media is and how lucky Africa is to have its glorious harmonious help. And this week he published this piece of detritus in reply to a New York Times editorial.

The Times editorial muses about how the trade relationship with China may have an adverse affect on many African nations’ press freedoms, nations already struggling with severe censorship and press intimidation. God knows what will happen when the Chinese media start “helping.” For those who don’t know, countries that benefit from China’s largess see an influx of Chinese media personnel hell-bent on getting the CCP’s message, and method, across.

The first half of Bob’s article says things that are correct. It is unfair to refer to the press freedoms of all African nations. Africa is a continent with a variety of political situations of increasing complexity and interests. In fact, Freedom House lists no fewer than 33 African nations with a “free” or “partly free” press.

That this wasn’t NYT’s point didn’t stop Bob from blathering on — indeed, someone else’s “point” has never deterred the Chinese press from enjoying a good all-purpose hate fest. The “Western media” is attacked in Bob’s article for everything from having a homogenized ideology to “portraying Africa as a continent of disease, war and poverty and nothing else.”

Every expat who lives in China has at one time or another seen this map or one like it: 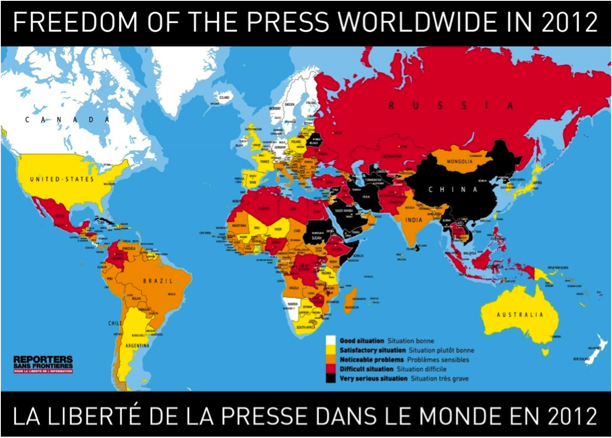 The above is from Reporters Sans Frontiers (this Freedom House map is easier on the eyes and simpler, but I like RFS, even though I think its interpretation is a little harsh). One can’t help but wonder, while looking at this map: Why in the hell are Chinese media being sent to African nations to show them how to run things? Surely it should be the other way around. Surely, someone from Ethiopia or the Central African Republic could take time out of their day to show China how it is done. Perhaps someone should start a non-profit. I would love to see a commercial of a Zimbabwean press officer walking through the halls of the Global Times asking for donations for these poor journalists in China to access Facebook. (Note: yes, you can access Facebook in Zimbabwe, though hardly without issue, under Mugabe.)

So, to Mr. Bob Wekesa, I say: Thou lump of foul deformity, you juggler, you canker-blossom, thou whoreson zed, thou unnecessary letter. Thou hath lived long and filled the world with vicious qualities.

P.S. No hard feelings Bob. I rather enjoyed your Global Times piece on Gaddafi.

Yes, the Chinese media had a little leftover hatred for the US this week over the Chen Guangcheng issue, something I wrote about at length last week. Quoth GT:

Some Western media have made improper comments and have suggested that the United States put forward certain requirements to China about Chen… This is absurd. Chen is a Chinese citizen. If the US government follows international laws and the basic norms of relations among nations, it does not have the right to make any demands on the Chinese government.

I have been given express permission from the US government to make the following statement: “Neener neener neener.”

I can feel it: Chinese media is headed toward a Hulk-like transformation. Soon we’ll be treated with headlines like, “China Hungry, Eat Indonesia! China Sad Now.”

Here’s where GT brings “Western media” into the mix:

No you don’t. Or rather, that’s not why. GT seems to suggest that criticism of China’s human rights, press freedoms and rule of law keeps China from its development.

The two aren’t even related. Even if they were related, they would only be distantly related to the point where it would be weird, though slightly arousing, were they to kiss on a dare.

So there we have it. I dare you, powers that be in China, to kiss free press on the mouth. With tongue. We’ll take it from there.

This editorial starts with, “As a journalist,” which is a bit of a worrying cue.

Su Li’s column is about how the Western media has blown the Bo Xilai and Chen Guangcheng issues out of control. No evidence for this is ever presented, so what I think the author means is the media “covered the story.” Because, as was previously pointed out, the Chinese media went out of its way to ignore Bo Xilai until he was finally remaindered up the kilt — and then all the media did was pat themselves on the back and remind everyone that China is a rule of law country and, of course, hates Western media for blowing it all out of proportion.

This is what annoys me when I follow foreign reports on the Bo Xilai case. They’re vying for sensational details, and are keeping an eye on each other to see what clues the rivals have got, correcting and chastising each other over false details.

Agreed. This would be much easier if details were released, and if they were released by anyone with even a shred of credibility (i.e. not the Politburo or Chinese newspapers). In the absence of credibility, suppositions will inevitably arise, with the assured disclaimer of being assumptions based on shady evidence. But Su Li’s editorial, like many other Chinese editorials, misinterpret this lack of information as an attempt to bring down the Chinese government via the Washington Post or whatever other newspaper Western demagogues have chosen as their tool for subversion.

With due respect, when it comes to a political topic in China, many of these foreign media outlets are seemingly more interested in creating political drama than producing solid analysis.

The author of this fiction seems obsessed with the observation that China is a mysterious country. Well, it is. The reason there was so much speculation about Bo Xilai and Chen Guangcheng is because China is about as closed off as it gets. The Party’s upper echelon operates in absolute secrecy, foreign journalists are regularly intimidated, the list of Chinese dissidents is peppered with online activists and writers who dared speak their mind, any opinion made public must be scrutinized according to the Party’s perceived version of reality and must present China as happy as Toontown in Who Framed Roger Rabbit. But then again, Su Li, you know all of this. After all, you’re a “journalist.”

In this editorial, he attacks the whole of “opinion,” not the media… I think. It’s a little hazy, to be honest.

This column was by far the most difficult one to read this week, and not just because it sounds like it was written by a chicken on cocaine, but because it’s in riddles.

The flourishing criticism has been brought about by the Internet. Much of it takes a moral responsibility and calls for a short-term mission, which is something impossible for any ruler to do.

What? What the hell does that mean?

China is in a phase of rapid development, which has been prompted by its ruling party.

Meanwhile, there are many problems within China’s ruling party and its systems.

These are undeniable facts. As long as one has rational thoughts, he can determine the interrelations of these facts.

A buffalo nickel for anyone who can tell me what in God’s teeth Hu is saying.

Articles that are simply anti-opinion are very hard to listen to because it’s basically someone telling you exactly why opinions don’t matter in an opinion piece.

It’s a surreal experience that, in large doses, makes you want to stick a hamster in your mouth and chew really, really hard.

That’s all this week. I leave you with a quote from Shakespeare and his oft misunderstood Brutus from Julius Caesar: “Not that I loved Caesar less, but that I loved Rome more.”

(There, an entire column, and I didn’t say fuck, or cunt, or wank stain, or fucktard, or lickjizz, or rapeknuckle. Now, get thee to a nunnery.)

10 Responses to “To Serve People: China Hungry! Smash Western Media And The West!”