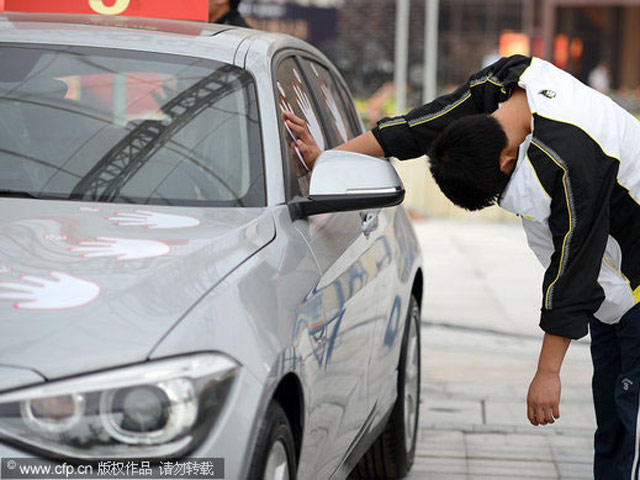 Everyone enjoys an old-fashioned physical endurance challenge for the sake of a material prize… right?

There are two parts about this story, from Chengdu Business Daily via Global Times, that get me:

Song Changjiang, 27, finally won the right to use a BMW car valued at 278,000 yuan ($43,618) for five years, by touching it for 87 hours at a real estate promotion activity in Chengdu, Sichuan Province…. According to the rule, competitors could have 15 minutes rest for every four hours of touching the car…. Though he had won the prize, Song was not happy, as he could not even walk due to swollen heels. “In the future, even if 5 million yuan are put in front of me, I would not take part in such a competition again,” Song said…. “It was like being kidnapped and forced to take part in this competition.”

Eight-seven divided 24 equals 3.625 days, with nights embedded within. Four days, three nights, to be precise… with only 15-minute intervals of rest for every four hours. Song Changjiang spent nearly half a week touching a BMW for — and this is amazing part No. 1 — the right to use it for five years. He said the experience felt like “being kidnapped,” and all for what? The car isn’t technically even his. If he wrecks it, he foots the bill, I bet. I hope Mr. Song is prepared to pay one hell of a premium on his new car insurance.

Go check out some of the photos of the competition on the site Car Buzz (from which the top photo was taken). The pain, the horror… I hope, against reason, that the runners-up took home some consolation. Say, a one-year lease on a BMW?

We’ve documented the wit of Global Times’s foreign copyeditors — namely, “The very model of a modern major general” and Alessandro – but you complete muppet is taking it a bit far, methinks. I mean, it’s true and all, but to call him a muppet. I mean, it’s true, no one should have taken part in that lousy competition, but… a muppet. I mean… he’s not a complete muppet, I don’t think. Probably not. He does need to drive safe though, since the car isn’t his, technically. So, yeah. Drive safe, I guess…