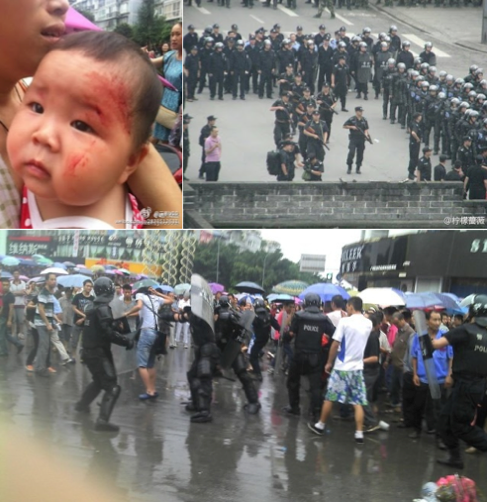 You can almost picture the central government official from the propaganda bureau or wherever penning this editorial before sending it over to GT. It sure does seem like Beijing is making an example out of Shifang’s local leaders, with this message to everyone else: buck up or fuck off. Quoth GT:

Only erroneous site selections, unqualified environmental protection indexes, and insufficient communication between officials and the public can set these projects in confrontation with public interests. This is exactly why we say what happened in Shifang should never be repeated.

This indeed tests local governments’ governance ability. China is changing, and the Internet is scrutinizing every single corner of society. Local officials should not overestimate their power and resist public supervision. The only thing they can rely on is law-based governance.

Of course, earlier in the same editorial, the author(s) was quick to exculpate the central government, as “the plant was a significant industrial project listed in Sichuan Province’s 12th Five-Year Plan, which was approved by central authorities”:

As a country with a massive population, a shortage of resources and low-level development, China doesn’t have the luxury to only undertake projects that carry no environmental risks like Japan and Europe, which now focus on high-end economy and transfer industries with environmental risks to other countries.

China does need petrochemical plants and molybdenum copper projects. As a densely populated country with many underdeveloped areas, China has to bear the cost of undertaking tiring and environmentally risky industries that many developed countries won’t go near.

That’s stupid, of course. But it’s the first message (incidentally, placed at the end of the editorial) that I find more interesting.

Yesterday, when the Shifang government canceled plans for the factory, I speculated that it was because they read the writing on the wall when Weibo and Baidu searches for “Shifang” remained unblocked. Correlation may not imply causation, but Global Times’s latest editorial at least makes it clear who was at fault. Perhaps the leaders in Shifang failed to pay adequate fealty to those above them?

In any case, it looks like the censors have recently begun to nix Weibo postings, lest the blame begins trickling too far up. According to China Media Project, among the posts that were deleted include the one featuring the now-infamous photo of a riot cop flipping off the camera, which I used yesterday in the post Information Emerges About Yesterday’s Shifang Protest, Plus Videos.

CMP has examples of other deleted posts:

Actor He Zhengjun (何政军), who has just under 200,000 followers on Weibo, responded in another post that was also deleted:

I grew up in Sichuan. My impression of Shifang is of a very small, good and peaceful county. They make cigarettes there, and Gongzi Pai cigars are also manufactured there. What’s been going on there lately, that police would give the people the middle finger?
我在四川長大，印象中什邡是个安宁祥和的小县。那里盛产烟叶，工字牌雪茄便出产于此。最近这里怎么了?警察也要对民众竖中指

This post, made to Sina Weibo by the manager of a media group, was also deleted by the authorities on July 3. It reads simply:

Resistance for environmental protection. Citizens are waking up.
环保抗争，公民觉醒。

Ah, now that’s more like business as usual. Let’s hope the “usual” part doesn’t involve a sneaky restart of the copper project. Admit it: you wouldn’t put that past any of these local leaders, or the almighty “law.”

2 Responses to “Global Times Weighs In On Shifang, And Weibo Censors Stir”