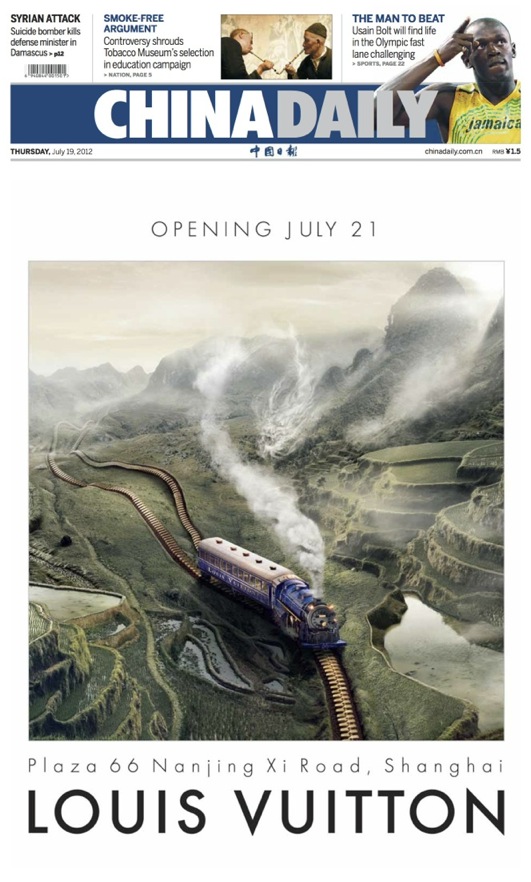 No one would confuse China Daily for a real newspaper — the kind that doesn’t write “A Friend’s Departure” on its front page when North Korea’s leader dies — but the company undoubtedly has real journalists on staff, veteran reporters who quietly toil within China’s noxious media environment to produce respectable work, and it’s those journalists I currently feel for. In yesterday’s edition of China Daily, Louis Vuitton is the front page. Not a story about LV, or a quarter-page ad, or even an ad jacket. Just Louis Vuitton, its address (Plaza 66 Nanjing Xi Road, Shanghai), and the words “Opening July 21.”

Why is this a big deal? Other papers have done this, you say.

Yes, other papers, like Richmond Times-Dispatch. China Daily is China’s top English-language publication, and I doubt it’s hurting for cash, judging by the size of the paper. Quite recently it’s expanded to the US and Europe, and is seeking to launch its African edition. It’s given Louis Vuitton the front page simply because, I’m guessing, Louis Vuitton nuzzled up against its marketing department, charming some pants off. Then LV offered lots of money.

As far as ads go, this one is brilliant. Whatever LV paid, it’s not enough. Because a lot of people — myself, McClatchy Newspapers Beijing bureau chief Tom Lasseter, Danwei — are talking about it, and it’s generating amazing publicity. Reuters even did a story about LV’s nebulous “opening.”

We’ll let marketers applaud LV, though. As for China Daily, the newspaper: I suppose it’s easy selling your soul when you never had one.

3 Responses to “Got A Pretty Penny? The China Daily Front Page Can Be Yours”

Leave a Reply to michaelnz