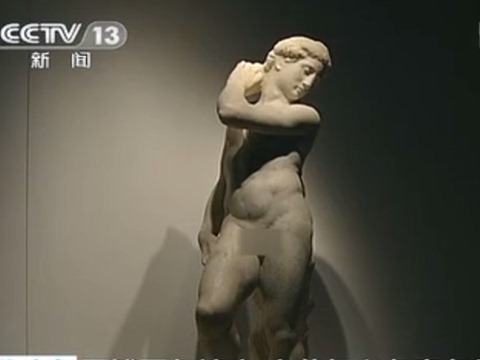 They censored David. DAVID. “One man’s meat is another man’s poison. It seems that employees working at China Central Television find David, a masterpiece created by the Italian artist Michelangelo, so distasteful that they blurred David’s private parts in a newscast about an exhibition in the National Museum of China. The video clip and the picture of a censored David have become viral on Chinese social media and are derided by netizens.” [Ministry of Tofu]

“A Confucian Constitution for China.” “Democracy is also flawed in practice. Political choices come down to the desires and interests of the electorate. This leads to two problems. First, the will of the majority may not be moral: it may favor racism, imperialism or fascism. Second, when there is a clash between the short-term interests of the populace and the long-term interests of mankind, as is the case with global warming, the people’s short-term interests become the political priority. As a result, democratically elected governments in America and elsewhere are finding it nearly impossible to implement policies that curb energy usage in the interests of humanity and of future generations. // In China, political Confucians defend an alternative approach: the Way of the Humane Authority…. // In modern China, Humane Authority should be exercised by a tricameral legislature: a House of Exemplary Persons that represents sacred legitimacy; a House of the Nation that represents historical and cultural legitimacy; and a House of the People that represents popular legitimacy.” [Jiang Qing and Daniel A. Bell, NY Times]

More predictions for the demise of the Great Firewall? Thanks, but we’ve heard em before. “‘I believe that ultimately censorship fails,’ said [Google Chairman Eric] Schmidt, when asked about whether the Chinese government’s censorship of the Internet can be sustained. ‘China’s the only government that’s engaged in active, dynamic censorship. They’re not shy about it.’ // When the Chinese Internet censorship regime fails, the penetration of information throughout China will also cause political and social liberalization that will fundamentally change the nature of the Chinese government’s relationship to its citizenry, Schmidt believes.” [Foreign Policy]

Corollary: “According to one report, a team of researchers at Harvard found that 13% of all social-media posts in China were censored.” [Analects]

Introducing: FLOAT Beijing: “A grassroots project allowing urbanites to measure air quality with sensor-equipped handmade kites that identify pollutants by lighting up the night sky in a variety of colors.” [GOOD]

You remember how piranhas were terrorizing Guangxi? Well, you can now collect 1000 yuan for killing them. Each one of them. Which is — pardon the expression — fucking insane. “Liuzhou Game Fishing Club have been commandeered to assist in the hunt and they are appealing for more volunteers. A net strung across the river on Monday failed to catch anything and now they are relying on regular fishing rods baited with pork.” [Liuzhou Laowai]

If you’re rich and you know it, buy a jet… company. “These planes go for somewhere around $15 million apiece. But it appears that the whole Hawker Beechcraft company, a venerable manufacturing firm based in Wichita and combining the heritage of the Beech and Hawker Siddeley aircraft lines, goes for a little more than 100 times that much, or around $1.79 billion. That’s the sales price announced today for the firm’s transfer (out of bankruptcy, and from current owners Goldman Sachs and Onex) to its new Chinese owners, the Superior Aircraft Beijing corporation.” [James Fallows, The Atlantic]

Well this is a load of shit. “Journalists in China, Uganda, Brazil and several other countries take ethics a bit more seriously than American reporters, according to a scholarly study of international journalism principles.” [Washington Examiner]

Sewage continues to be dumped in waters. (And emulsion.) “Nearly 76 percent of the sewage generated in Guangdong province last year was directly discharged into local rivers, the province reported on Monday. // …Because of the serious pollution, the water quality of major rivers within Guangdong province is poor, threatening the health of local residents who live along the province’s riverbanks, the bulletin said.” [China Daily]

Embassy guards do something! “On July 2, Li Wensheng, a guard on duty outside the Tanzanian embassy, Liangmahe Nanlu, saw a man running past carrying a white handbag and with a knife sticking out of his pocket at around 10 pm. A foreign woman, later found to be Russian, was chasing the man. // Li used his radio to alert guards at the Ukrainian embassy, Sanlitun Dongliujie, to tackle the suspect, according to the press release from Beijing Armed Police.” [Global Times]

I missed this story from Saturday for Monday’s links, but you get it now: you reap what you sow, Fang Binxing: “’It’s a shame it wasn’t you.’ This comment, reposted thousands of times, came in response to an obituary posted by Fang Binxing on Sina Weibo, China’s Twitter. It may seem odd that the president of Beijing University of Posts and Telecommunications should arouse such hatred in total strangers. But Fang is not just a university president–he is also the father of China’s Great Firewall.” [Tea Leaf Nation]

This is why you never leave your pet unattended: dog dies after simple grooming visit. [The Nanfang]

Bikini competition to determine who goes to London to report, sponsored by Fujian TV and Sina Corp. [China Daily]

That censored David has spawned a hilarious meme (via Tea Leaf Nation):

A few more over at Ministry of Tofu.

12 Responses to “Mid-Week Links: Censorship taken too far is just douchebaggery, a proposed tricameral legislature for China (utopia!), and a Fang Binxing story”