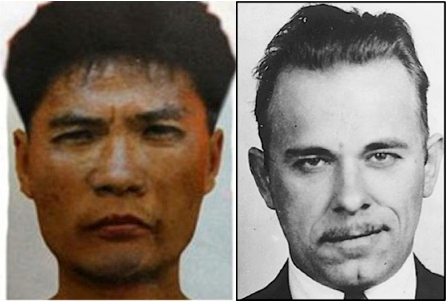 As uncovered by someone researching the case (disclaimer: these details are all yet unverified), Zhou had two movie tickets in his pocket when he was ambushed by plainclothes police officers. Setting aside the possibility that Zhou killed himself, which would spoil the comparison, you’ll recall that Dillinger was purported to have been gunned down by plainclothes officers outside the Biograph Theater in Chicago. One of the tickets was for The Silent War on the 12th, a movie about undercover CPC agents trying to infiltrate Kuomintang urban strongholds in the 1950s. (UPDATE, 7:06 pm: I see that China Daily also reported the two movies were The Silent War and science-fiction action film Lockout.)

Zhou had his very own blackbird, too, who is currently under police custody. Knowing nothing else about her, we can only assume she’s half-French and beautiful, like Dillinger’s girlfriend. (UPDATE, 7:06 pm: Picture of her.)

Zhou’s first gun was one he stole in Chongqing, which in an askew way reminds of Dillinger’s ploy to smuggle guns into prison. And apparently the weapon that was found on Zhou’s dead body was from Burma, leading authorities to believe he served as a mercenary in that country. Indiana, where Dillinger was imprisoned, is kind of like Burma in its isolation and relative backwardness, so that comparison is a definite check.

While we’re on the subject, there’s this, from a fascinating Global Times write-up:

Apparently that’s what one vegetable vendor rushed inside and shouted when she heard “firecrackers” nearby that were gunshots.

The killer was spotted by plainclothes police Zhou Jin and Wang Xiaoyu as he was making a phone call at 6:40 am near Tongjiaqiao and was then followed.

“We were not 100 percent sure it was Zhou Kehua as he didn’t use a cellphone according to the information in our possession,” Zhou Jin told reporters afterwards.

Zhou Kehua suddenly turned around toward the two policemen and muttered something to himself when they followed him into an alley, said Zhou Jin.

“We were ready to draw our guns after sensing danger, then Zhou Kehua began to shoot at us,” said Zhou Jin, adding that he hid himself behind a power pole and Wang stood against a wall.

Zhou Kehua fired three shots toward them, causing no injuries, and the two officers let off two rounds each to “annihilate him.”

Annihilate him. The wording comes straight from an aspiring screenplay writer. The bullet passes through his cheek as our antihero crashes to the pavement, his eyes diluted with a meaning he tries to grasp but cannot as his life — his crimes, his passion, his love — leaks out of his body and into cracks which are filling with blood…

Obviously the part would be played by Jackie Chan. 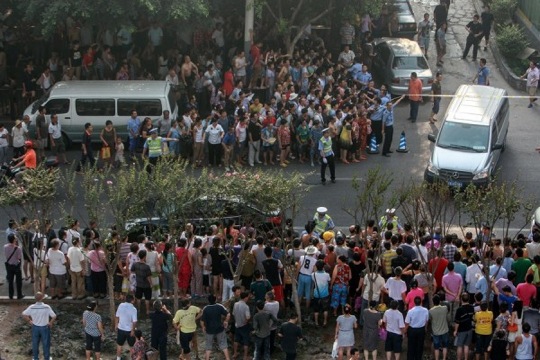