The man seen with the knife is apparently Lu Jianbo, son of the deputy political commissar of the Jiangsu Province Public Security Bureau. The PSB’s Weibo has confirmed that Lu is under “investigation,” which should be aided by the video above, taken Friday night, in which Lu wields a knife at a woman on the ground, cutting her a reported 34 times (images after the jump).

The victim somehow manages to get on her feet and retreat behind a door, at which point an obviously incensed Lu tries to kick down the barrier, gesticulating wildly, and, according to Weibo, shouting, “My family started the Public Security Bureau! Killing people is not a problem!” UPDATE, 3:21 pm: “My family runs the Public Security Bureau” is probably a better translation for “公安局是我家开的.”

The victim suffered tendon and nerve damage on the hand, and was cut pretty badly on the legs. She said the dispute was over an illegally built house (or extension of one). No idea how it escalated to the point it did. Youku video for those in China after the jump. UPDATE, 10:42 am: They’ve scrubbed all videos of “Lu Jianbo” from Youku. You’ll get a news story via Tudou instead. 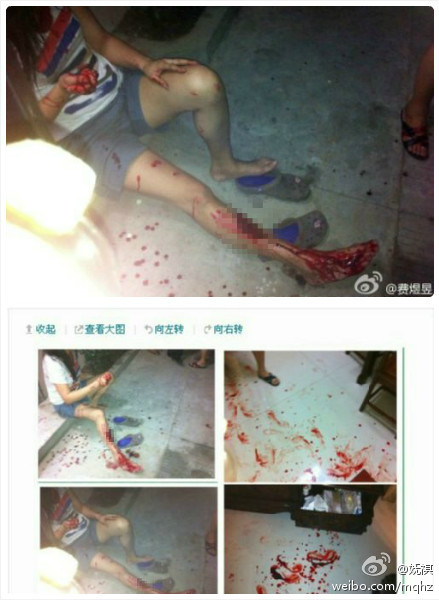